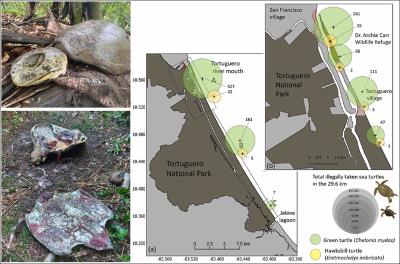 Tortuguero, Costa Rica is considered the second largest green turtle (Chelonia mydas) rookery in the world. By 1950, Tortuguero was one of the sites with the greatest take of green turtles in the Caribbean. Currently, Tortuguero is a worldwide example for ecotourism-based on sea turtle conservation. However, illegal take of nesting turtles still occurs. We aimed to describe the illegal take at Tortuguero, estimating the minimum number of sea turtles taken using data collected during daily and weekly track surveys from 2005 to 2021. Additionally, we conducted 12 semi-structured interviews with key informants to obtain a better understanding of this activity. We documented 735 nesting turtles illegally taken at Tortuguero, being the green turtle the most affected species; these findings were also supported by our interviewees. Respondents stated that in Tortuguero the take of sea turtles has always occurred and traditions regarding sea turtle meat consumption are still present, even though it is considered shameful in the village. However, our interviewees affirmed that most of the sea turtles taken are traded to other locations away from Tortuguero. Our findings represent the minimum of illegal take (documented only at the beach), as not all the sea turtles taken were observed. Finally, despite long-standing conservation efforts carried out in Tortuguero, further changes in the National Park's management plans are needed, including more personnel and increased law enforcement. This may be necessary to reduce the impact on the Tortuguero green turtle nesting population in the near future.

We would like to thank research assistants, volunteers from various organizations, and locals that over the past years have helped us to collect the data and monitor the nesting beach. We thank the Sea Turtle Conservancy for all the logistics support during this research. We also would like to thank Ivan Ramos and Ricardo Vargas for the valuable information collected during the weekly track surveys. We thank the Ministry of Environment and Energy of Costa Rica, the National System of Conservation Areas of Costa Rica, and the Tortuguero Conservation Area for the research permits to conduct this research. Finally, this publication was benefitted by the comments of two anonymous reviewers, for which we are thankful. This study was conducted under the permit SINAC-ACTo-DIR-RES-026-2021 EXPEDIENTE D-PA-SINAC-PNI-ACTo-012-2021.