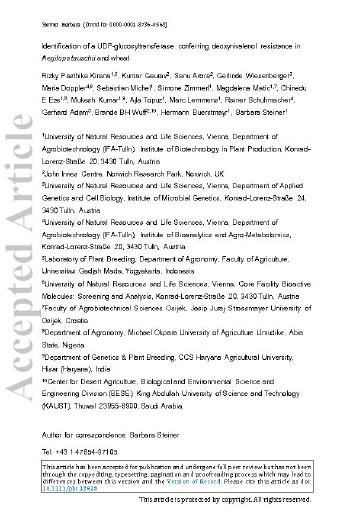 Aegilops tauschii is the diploid progenitor of the wheat D subgenome and a valuable resource for wheat breeding, yet, genetic analysis of resistance against Fusarium head blight (FHB) and the major Fusarium mycotoxin deoxynivalenol (DON) is lacking. We treated a panel of 147 Ae. tauschii accessions with either F. graminearum spores or DON solution, and recorded the associated disease spread or toxin-induced bleaching. A k-mer-based association mapping pipeline dissected the genetic basis of resistance and identified candidate genes. After DON infiltration nine accessions revealed severe bleaching symptoms concomitant with lower conversion rates of DON into the non-toxic DON-3-O-glucoside. We identified the gene AET5Gv20385300 on chromosome 5D encoding a uridine diphosphate (UDP)-glucosyltransferase (UGT) as the causal variant and the mutant allele resulting in a truncated protein was only found in the nine susceptible accessions. This UGT is also polymorphic in hexaploid wheat and when expressed in Saccharomyces cerevisiae only the full-length gene conferred resistance against DON. Analyzing the D subgenome helped to elucidate the genetic control of FHB resistance and identified a UGT involved in DON detoxification in Ae. tauschii and hexaploid wheat. This resistance mechanism is highly conserved since the UGT is orthologous to the barley UGT HvUGT13248 indicating descent from a common ancestor of wheat and barley.

RPK was supported and funded by the Ministry of Education and Culture of the Republic of Indonesia and the Austrian Agency for International Cooperation in Education and Research (OeAD-GmbH) in cooperation with ASEA-UNINET. MM received funding from the European Commission, Erasmus+ programme and CEE from OeAD-GmbH (Ernst Mach Grant) and the West African Science Service Centre on Climate Change and Adapted Land Use.Funding for this research was also provided by the Austrian Science Fund, Special Research project SFB F3711.

Except where otherwise noted, this item's license is described as Archived with thanks to Plant Biotechnology Journal under a Creative Commons license, details at: http://creativecommons.org/licenses/by/4.0/