﻿A new species of Bathypathes (Cnidaria, Anthozoa, Antipatharia, Schizopathidae) from the Red Sea and its phylogenetic position 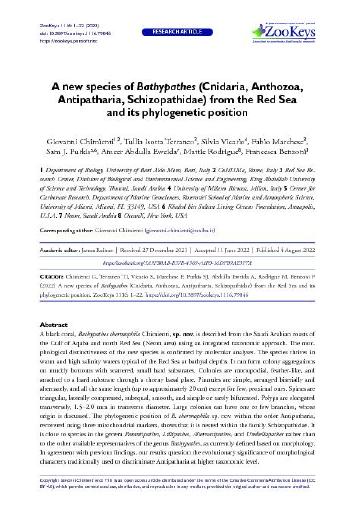 A black coral, Bathypathes thermophila Chimienti, sp. nov. is described from the Saudi Arabian coasts of the Gulf of Aqaba and north Red Sea (Neom area) using an integrated taxonomic approach. The morphological distinctiveness of the new species is confirmed by molecular analyses. The species thrives in warm and high salinity waters typical of the Red Sea at bathyal depths. It can form colony aggregations on muddy bottoms with scattered, small hard substrates. Colonies are monopodial, feather-like, and attached to a hard substrate through a thorny basal plate. Pinnules are simple, arranged biserially and alternately, and all the same length (up to approximately 20 cm) except for few, proximal ones. Spines are triangular, laterally compressed, subequal, smooth, and simple or rarely bifurcated. Polyps are elongated transversely, 1.5–2.0 mm in transverse diameter. Large colonies can have one or few branches, whose origin is discussed. The phylogenetic position of B. thermophila sp. nov. within the order Antipatharia, recovered using three mitochondrial markers, shows that it is nested within the family Schizopathidae. It is close to species in the genera Parantipathes, Lillipathes, Alternatipathes, and Umbellapathes rather than to the other available representatives of the genus Bathypathes, as currently defined based on morphology. In agreement with previous findings, our results question the evolutionary significance of morphological characters traditionally used to discriminate Antipatharia at higher taxonomic level.

We warmly thank Neom, and in particular Thamer Habis, Razan Khamis, Peter Mackelworth, Paul Marshall, Justin Mynar, and Giacomo Palavacini for organising, coordinating, and facilitating the Red Sea Expedition in 2020. We would like to thank OceanX and the crew of OceanXplorer for their operational and logistical support for the duration of this expedition. In particular, we would like to acknowledge the ROV and Sub teams for data acquisition, sample collection and support of scientific operations on board OceanXplorer. We would also like to thank OceanX Media, for documenting and communicating this work with the public. We are grateful to Ivan Agerton, on behalf of OceanX Media, for photographs in Fig. 6c and d, Christina Alcon for the support in the DNA extraction and amplification, and Alessandro Genovese for facilitating the use of the SEM at KAUST Imaging Core Lab.

Except where otherwise noted, this item's license is described as Archived with thanks to ZooKeys under a Creative Commons license, details at: http://creativecommons.org/licenses/by/4.0/