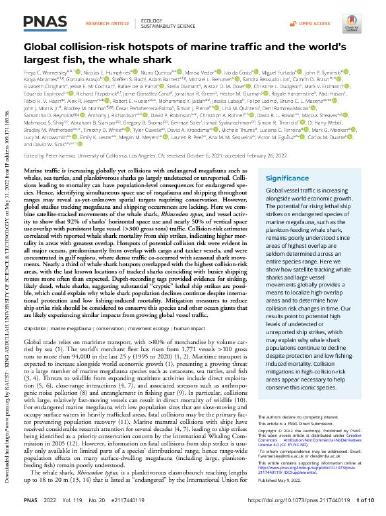 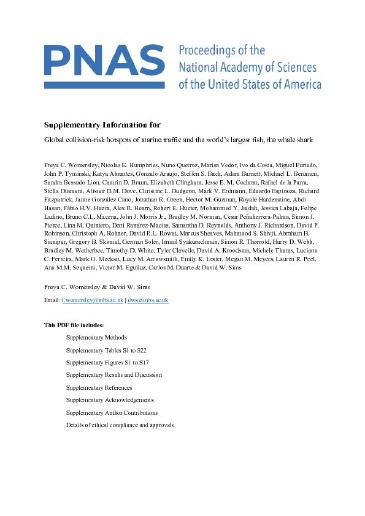 Marine traffic is increasing globally yet collisions with endangered megafauna such as whales, sea turtles, and planktivorous sharks go largely undetected or unreported. Collisions leading to mortality can have population-level consequences for endangered species. Hence, identifying simultaneous space use of megafauna and shipping throughout ranges may reveal as-yet-unknown spatial targets requiring conservation. However, global studies tracking megafauna and shipping occurrences are lacking. Here we combine satellite-tracked movements of the whale shark, Rhincodon typus, and vessel activity to show that 92% of sharks’ horizontal space use and nearly 50% of vertical space use overlap with persistent large vessel (>300 gross tons) traffic. Collision-risk estimates correlated with reported whale shark mortality from ship strikes, indicating higher mortality in areas with greatest overlap. Hotspots of potential collision risk were evident in all major oceans, predominantly from overlap with cargo and tanker vessels, and were concentrated in gulf regions, where dense traffic co-occurred with seasonal shark movements. Nearly a third of whale shark hotspots overlapped with the highest collision-risk areas, with the last known locations of tracked sharks coinciding with busier shipping routes more often than expected. Depth-recording tags provided evidence for sinking, likely dead, whale sharks, suggesting substantial “cryptic” lethal ship strikes are possible, which could explain why whale shark population declines continue despite international protection and low fishing-induced mortality. Mitigation measures to reduce ship-strike risk should be considered to conserve this species and other ocean giants that are likely experiencing similar impacts from growing global vessel traffic.

Funding for data analysis was provided by the UK Natural Environment Research Council (NERC) through a University of Southampton INSPIRE DTP PhD Studentship to F.C.W. Additional funding for data analysis was provided by NERC Discovery Science (NE/R00997/X/1) and the European Research Council (ERC-AdG-2019 883583 OCEAN DEOXYFISH) to D.W.S.,Fundac ̧~aoparaaCi^encia e a Tecnologia (FCT) under PTDC/BIA/28855/2017 and COMPETE POCI-01–0145-FEDER-028855, and MARINFO–NORTE-01–0145-FEDER-000031 (funded by Norte Portugal Regional Operational Program[NORTE2020] under the PORTUGAL 2020 Partnership Agreement, through the European Regional Development Fund–ERDF) to N.Q. FCT also supported N.Q.(CEECIND/02857/2018) and M.V. (PTDC/BIA-COM/28855/2017). D.W.S. was supported by a Marine Biological Association Senior Research Fellowship. All tagging procedures were approved by institutional ethical review bodies and complied with all relevant ethical regulations in the jurisdictions in which they were performed. Details for individual research teams are given in SI Appendix, section 8. Full acknowledgments for tagging and field research are given in SI Appendix, section 7. This research is part of the Global Shark Movement Project(https://www.globalsharkmovement.org).

Except where otherwise noted, this item's license is described as Archived with thanks to Proceedings of the National Academy of Sciences under a Creative Commons license, details at: https://creativecommons.org/licenses/by-nc-nd/4.0/