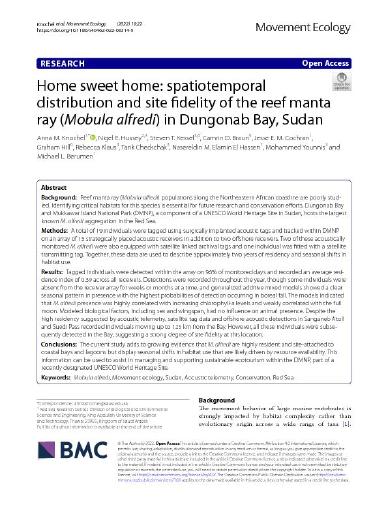 Background: Reef manta ray (Mobula alfredi) populations along the Northeastern African coastline are poorly studied. Identifying critical habitats for this species is essential for future research and conservation efforts. Dungonab Bay and Mukkawar Island National Park (DMNP), a component of a UNESCO World Heritage Site in Sudan, hosts the largest known M. alfredi aggregation in the Red Sea. Methods: A total of 19 individuals were tagged using surgically implanted acoustic tags and tracked within DMNP on an array of 15 strategically placed acoustic receivers in addition to two offshore receivers. Two of these acoustically monitored M. alfredi were also equipped with satellite linked archival tags and one individual was fitted with a satellite transmitting tag. Together, these data are used to describe approximately two years of residency and seasonal shifts in habitat use. Results: Tagged individuals were detected within the array on 96% of monitored days and recorded an average residence index of 0.39 across all receivers. Detections were recorded throughout the year, though some individuals were absent from the receiver array for weeks or months at a time, and generalized additive mixed models showed a clear seasonal pattern in presence with the highest probabilities of detection occurring in boreal fall. The models indicated that M. alfredi presence was highly correlated with increasing chlorophyll-a levels and weakly correlated with the full moon. Modeled biological factors, including sex and wingspan, had no influence on animal presence. Despite the high residency suggested by acoustic telemetry, satellite tag data and offshore acoustic detections in Sanganeb Atoll and Suedi Pass recorded individuals moving up to 125 km from the Bay. However, all these individuals were subsequently detected in the Bay, suggesting a strong degree of site fidelity at this location. Conclusions: The current study adds to growing evidence that M. alfredi are highly resident and site-attached to coastal bays and lagoons but display seasonal shifts in habitat use that are likely driven by resource availability. This information can be used to assist in managing and supporting sustainable ecotourism within the DMNP, part of a recently designated UNESCO World Heritage Site.

We are grateful to Equipe Cousteau Sudan Shark and Ray Conservation and Management Program, the Darwin Initiative and the Deep Aquarium, Hull, UK for financial and logistical support for this project. We thank the Wildlife Conservation General Administration (WCGA), the Red Sea State Government, the Red Sea University, the Security Administration, and the field team from KAUST. We also thank Ben Jones for field support and Aaron Fisk for PDF support.
This research was supported by The Deep Aquarium (Grant # 00176; http://www.thedeep.co.uk) and The Darwin Initiative (Grant # 21–019; http://www.gov.uk/government/groups/the-darwin-initiative) in addition to baseline funding from MLB.

Except where otherwise noted, this item's license is described as © The Author(s) 2022. Open Access This article is licensed under a Creative Commons Attribution 4.0 International License,