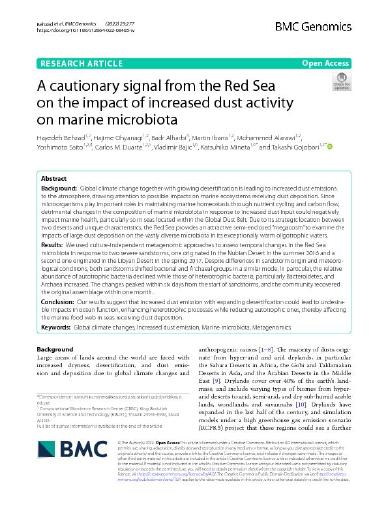 Background: Global climate change together with growing desertification is leading to increased dust emissions to the atmosphere, drawing attention to possible impacts on marine ecosystems receiving dust deposition. Since microorganisms play important roles in maintaining marine homeostasis through nutrient cycling and carbon flow, detrimental changes in the composition of marine microbiota in response to increased dust input could negatively impact marine health, particularly so in seas located within the Global Dust Belt. Due to its strategic location between two deserts and unique characteristics, the Red Sea provides an attractive semi-enclosed “megacosm” to examine the impacts of large dust deposition on the vastly diverse microbiota in its exceptionally warm oligotrophic waters. Results: We used culture-independent metagenomic approaches to assess temporal changes in the Red Sea microbiota in response to two severe sandstorms, one originated in the Nubian Desert in the summer 2016 and a second one originated in the Libyan Desert in the spring 2017. Despite differences in sandstorm origin and meteorological conditions, both sandstorms shifted bacterial and Archaeal groups in a similar mode. In particular, the relative abundance of autotrophic bacteria declined while those of heterotrophic bacteria, particularly Bacteroidetes, and Archaea increased. The changes peaked within six days from the start of sandstorms, and the community recovered the original assemblage within one month. Conclusion: Our results suggest that increased dust emission with expanding desertification could lead to undesirable impacts in ocean function, enhancing heterotrophic processes while reducing autotrophic ones, thereby affecting the marine food web in seas receiving dust deposition.

Except where otherwise noted, this item's license is described as Archived with thanks to BMC Genomics under a Creative Commons license, details at: https://creativecommons.org/licenses/by/4.0