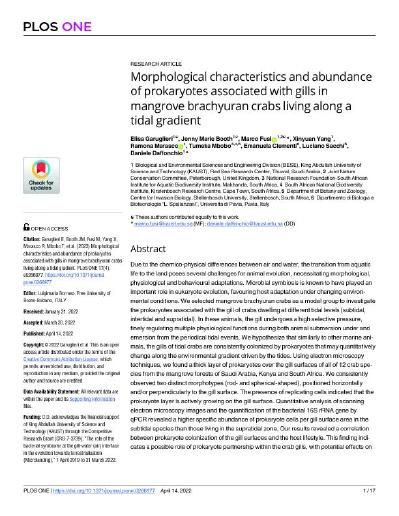 Due to the chemico-physical differences between air and water, the transition from aquatic life to the land poses several challenges for animal evolution, necessitating morphological, physiological and behavioural adaptations. Microbial symbiosis is known to have played an important role in eukaryote evolution, favouring host adaptation under changing environmental conditions. We selected mangrove brachyuran crabs as a model group to investigate the prokaryotes associated with the gill of crabs dwelling at different tidal levels (subtidal, intertidal and supratidal). In these animals, the gill undergoes a high selective pressure, finely regulating multiple physiological functions during both animal submersion under and emersion from the periodical tidal events. We hypothesize that similarly to other marine animals, the gills of tidal crabs are consistently colonized by prokaryotes that may quantitatively change along the environmental gradient driven by the tides. Using electron microscopy techniques, we found a thick layer of prokaryotes over the gill surfaces of all of 12 crab species from the mangrove forests of Saudi Arabia, Kenya and South Africa. We consistently observed two distinct morphotypes (rod- and spherical-shaped), positioned horizontally and/or perpendicularly to the gill surface. The presence of replicating cells indicated that the prokaryote layer is actively growing on the gill surface. Quantitative analysis of scanning electron microscopy images and the quantification of the bacterial 16S rRNA gene by qPCR revealed a higher specific abundance of prokaryote cells per gill surface area in the subtidal species than those living in the supratidal zone. Our results revealed a correlation between prokaryote colonization of the gill surfaces and the host lifestyle. This finding indicates a possible role of prokaryote partnership within the crab gills, with potential effects on animal adaptation to different levels of the intertidal gradient present in the mangrove ecosystem.

We thank Sadaf Umer and Taskeen Begum for their invaluable help. We are grateful to Giuseppe Merlino and Matteo Callegari for advice on the qPCR methods.
D.D. acknowledges the financial support of King Abdullah University of Science and Technology (KAUST) through the Competitive Research Grant (CRG-7-3739), “The role of the bacterial symbiome at the gill-water (air) interface in the evolution towards terrestrialisation (Microlanding),” 1 April 2019 to 31 March 2022

Except where otherwise noted, this item's license is described as Archived with thanks to PLOS ONE under a Creative Commons license, details at: http://creativecommons.org/licenses/by/4.0/