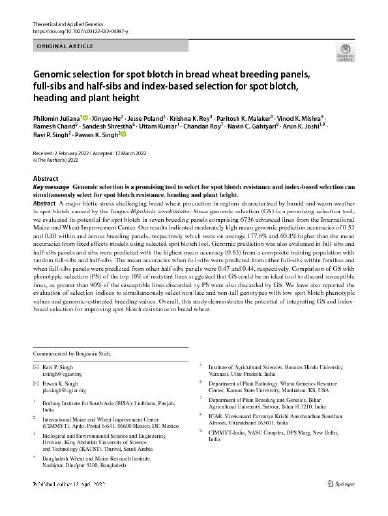 A major biotic stress challenging bread wheat production in regions characterized by humid and warm weather is spot blotch caused by the fungus Bipolaris sorokiniana. Since genomic selection (GS) is a promising selection tool, we evaluated its potential for spot blotch in seven breeding panels comprising 6736 advanced lines from the International Maize and Wheat Improvement Center. Our results indicated moderately high mean genomic prediction accuracies of 0.53 and 0.40 within and across breeding panels, respectively which were on average 177.6% and 60.4% higher than the mean accuracies from fixed effects models using selected spot blotch loci. Genomic prediction was also evaluated in full-sibs and half-sibs panels and sibs were predicted with the highest mean accuracy (0.63) from a composite training population with random full-sibs and half-sibs. The mean accuracies when full-sibs were predicted from other full-sibs within families and when full-sibs panels were predicted from other half-sibs panels were 0.47 and 0.44, respectively. Comparison of GS with phenotypic selection (PS) of the top 10% of resistant lines suggested that GS could be an ideal tool to discard susceptible lines, as greater than 90% of the susceptible lines discarded by PS were also discarded by GS. We have also reported the evaluation of selection indices to simultaneously select non-late and non-tall genotypes with low spot blotch phenotypic values and genomic-estimated breeding values. Overall, this study demonstrates the potential of integrating GS and index-based selection for improving spot blotch resistance in bread wheat.

Except where otherwise noted, this item's license is described as This article is licensed under a Creative Commons Attribution 4.0 International License, which permits use, sharing, adaptation, distribution and reproduction in any medium or format, as long as you give appropriate credit to the original author(s) and the source, provide a link to the Creative Commons licence, and indicate if changes were made. http://creativecommons.org/licenses/by/4.0/