Sea-level extremes of meteorological origin in the Red Sea 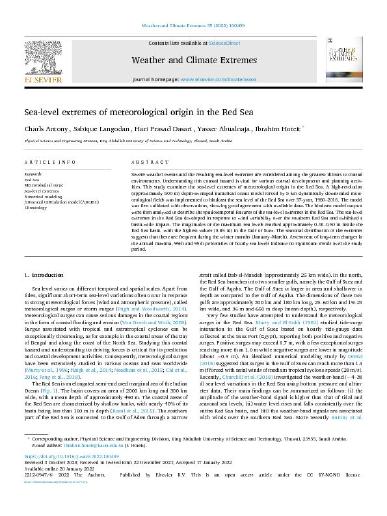 Severe weather events and the resulting sea-level extremes are considered among the greatest threats to coastal environments. Understanding this coastal hazard is vital for various coastal developments and planning activities. This study examines the sea-level extremes of meteorological origin in the Red Sea. A high-resolution (approximately 500 m) depth-averaged numerical ocean model forced by 5 km dynamically downscaled meteorological fields was implemented to hindcast the sea level of the Red Sea over 37-year, 1980–2016. The model was first validated with observations, showing good agreement with available data. The hindcast model outputs were then analyzed to describe the spatiotemporal features of the sea-level extremes in the Red Sea. The sea-level extremes in the Red Sea developed in response to wind variability over the southern Red Sea and exhibited a basin-wide impact. The magnitudes of the maximum sea levels reached approximately 0.30–0.50 m inside the Red Sea basin, with the highest values (0.85 m) in the Gulf of Suez. The seasonal distribution of the extremes suggests that these are frequent during the winter months (January–March). Assessment of long-term changes in the annual maxima, 99th and 95th percentiles of hourly sea levels indicate no significant trends over the study period.

We implemented the ADvanced CIRCulation (ADCIRC) model (Luettich et al., 1992; Luettich and Westerink, 2004), which solves the vertically integrated shallow-water equations for water-surface elevations and currents, to hindcast the sea level in the Red Sea due to meteorological forces. The GEBCO (General Bathymetric Chart of the Oceans) data with 30 arc-second resolution (∼900 m) was used for the model bathymetry. The model was configured on an unstructured mesh, using fine resolution (∼500 m) near the coast and coarse resolution (∼20 km) in the deep waters. The bottom friction coefficient was prescribed as spatially uniform with a value of 0.0025, and the bottom stress formulation is quadratic. We did not consider the effect of tide-surge interactions on the surge (Antony et al., 2020) as the Red Sea has a low tidal regime (Madah et al., 2015; Gharbi et al., 2018; Guo et al., 2018; Pugh et al., 2019) and the interaction effects are expected to be small. Accordingly, no tidal forcing was used in the model. ADCIRC runs were conducted in blocks spanning 1-year periods with an additional 5-day ramp period for a total of 37-year (1980–2016). The model time step was set to 10 s and the outputs were stored at hourly intervals for further analysis. ADCIRC was forced with hourly meteorological fields generated by a 5 km assimilative Weather Research and Forecasting (WRF) model, which included u and v components of wind speed at 10 m height above mean sea level and atmospheric pressure at mean sea level. The WRF model was implemented with two two-way nested domains with 15 km and 5 km horizontal resolutions, covering the parent domain between 10°E-110°E, 19°S-46°E and the Arabian Peninsula between 23°E to 81°E, 6°S to 36°E, respectively. The model is configured with 51 vertical levels, and was nested (initial and boundary conditions) within the European Centre for Medium-Range Weather Forecasts Reanalysis Interim (Dee et al., 2011) available at 0.75° horizontal resolution. The model physics includes: The Rapid Radiative Transfer Model for Global circulation models scheme to compute the surface shortwave and longwave irradiance components (Iacono et al., 2008), Thompson microphysics to represent the cloud-aerosol feedbacks (Thompson and Eidhammer, 2014; Thompson et al., 2016), the Kain-Fritsch mass flux scheme for cumulus convection (Kain and Fritsch, 1993; Kain, 2004), Mellor-Yamada-Nakanishi and Niino Level 2.5 (MYNN2.5) for the boundary layer process, and the Noah land surface scheme for surface processes (Chen and Dudhia, 2001). The terrain elevation, land-use, and soil types are interpolated from the United States Geological Survey (USGS) data at 2 and 1 arc-minute for the 15 and 5 km domains, respectively. The model further assimilated a variety of available regional in-situ and satellite data using a cyclic 3DVAR approach (Viswanadhapalli et al., 2017). The WRF model outputs, available at 1 h intervals, have been extensively validated and employed in several Red Sea studies and applications, such as studying the atmospheric circulation and variability over the Arabian Peninsula (Viswanadhapalli et al., 2017; Langodan et al., 2017), forcing ocean models of the Red Sea (Langodan et al., 2016; Zhan et al., 2019), and supporting various engineering applications, including renewable energy (Langodan et al., 2016; Dasari et al., 2019, 2021; Zhan et al., 2021; Antony et al., 2021; Hoteit et al., 2021). Langodan et al. (2016) reported good agreement between the WRF simulated wind with scatterometer and buoy data for non-coastal areas and synoptic observations for coastal areas of the Red Sea. Dasari et al. (2019) analyzed different radiation parameters and compared them with available in-situ measurements, indicating good skill of the model in reproducing the radiation parameters. Langodan et al. (2020) and Antony et al. (2021) used the WRF data to estimate the extreme waves and water levels in the coastal waters of King Abdullah Economic City, Saudi Arabia, located on the central-eastern coast of the Red Sea. Recently, Zhan et al. (2021) investigated the general circulation dynamics, water exchange, and their seasonal variabilities of the Red Sea Project lagoon in the Red Sea using a high-resolution nested coastal model forced with WRF fields. All these studies report a high skill of the WRF-downscaled field at describing the atmospheric conditions over the Red Sea.This work was supported by the Office of Sponsored Research (OSR) at King Abdullah University of Science and Technology (KAUST), Saudi Arabia under the Virtual Red Sea Initiative (Grant # REP/1/3268-01-01). This study made use of the Supercomputing Laboratory resources at KAUST. Graphs and maps were drawn using Generic Mapping Tools (Wessel et al. 2013) and FigureGen (Dietrich et al. 2013). Color palettes used in the figures were obtained from cpt-city (http://soliton.vm.bytemark.co.uk/pub/cpt-city/). The authors would like to thank the ADCIRC developers for making the model freely available.

Except where otherwise noted, this item's license is described as This is an open access article under the CC BY-NC-ND license.