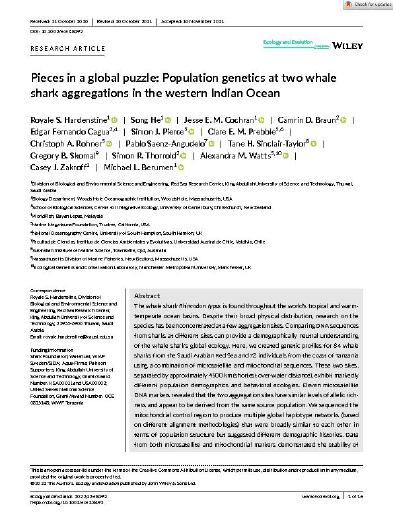 The whale shark Rhincodon typus is found throughout the world's tropical and warm-temperate ocean basins. Despite their broad physical distribution, research on the species has been concentrated at a few aggregation sites. Comparing DNA sequences from sharks at different sites can provide a demographically neutral understanding of the whale shark's global ecology. Here, we created genetic profiles for 84 whale sharks from the Saudi Arabian Red Sea and 72 individuals from the coast of Tanzania using a combination of microsatellite and mitochondrial sequences. These two sites, separated by approximately 4500 km (shortest over-water distance), exhibit markedly different population demographics and behavioral ecologies. Eleven microsatellite DNA markers revealed that the two aggregation sites have similar levels of allelic richness and appear to be derived from the same source population. We sequenced the mitochondrial control region to produce multiple global haplotype networks (based on different alignment methodologies) that were broadly similar to each other in terms of population structure but suggested different demographic histories. Data from both microsatellite and mitochondrial markers demonstrated the stability of genetic diversity within the Saudi Arabian aggregation site throughout the sampling period. These results contrast previously measured declines in diversity at Ningaloo Reef, Western Australia. Mapping the geographic distribution of whale shark lineages provides insight into the species’ connectivity and can be used to direct management efforts at both local and global scales. Similarly, understanding historical fluctuations in whale shark abundance provides a baseline by which to assess current trends. Continued development of new sequencing methods and the incorporation of genomic data could lead to considerable advances in the scientific understanding of whale shark population ecology and corresponding improvements to conservation policy

The Red Sea work would not have been possible without the support and assistance of KAUST’s Reef Ecology Lab. The authors would also like to specifically acknowledge the contributions of Dream Divers staff for on- site logistic assistance in Al Lith; Amr Gusti, Christine Nelson, and Manal Bamashmos for general logistic and administra-tive assistance, KAUST’s Bioscience Core Laboratory for facilitat-ing sequencing, and the wider KAUST community for participating in various whale shark watching expeditions and providing us with extra survey and sampling days. Work in Saudi Arabia was funded in part by KAUST baseline research funds (to MLB), KAUST award nos. USA00002 and KSA 00011 (to SRT), and the U.S. National Science Foundation (OCE 0825148 to SRT and GBS). In Tanzania thanks to Liberatus Mokoki and the Whale Safari crew, Carlos Omari, Jean Anne de Villiers, and Amin Abdallah for their support with field work on Mafia Island. We also thank Jason Rubens, Baraka Kuguru, and the team at WWF Tanzania for initiating and facilitating our research in Tanzania. Field work in Tanzania was funded by WWF Tanzania, WWF Sweden/SIDA, Aqua- Firma, the Shark Foundation, Waterlust, two private trusts, and Patreon supporters. We thank the editorial staff at Ecology and Evolution and three anonymous reviewers for their comments and suggestions that substantially improved the manuscript.