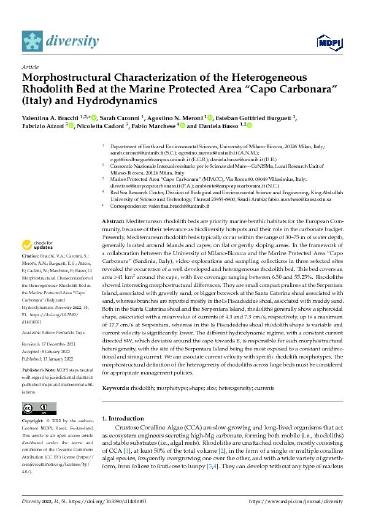 Mediterranean rhodolith beds are priority marine benthic habitats for the European Community, because of their relevance as biodiversity hotspots and their role in the carbonate budget. Presently, Mediterranean rhodolith beds typically occur within the range of 30–75 m of water depth, generally located around islands and capes, on flat or gently sloping areas. In the framework of a collaboration between the University of Milano-Bicocca and the Marine Protected Area “Capo Carbonara” (Sardinia, Italy), video explorations and sampling collections in three selected sites revealed the occurrence of a well developed and heterogeneous rhodolith bed. This bed covers an area >41 km2 around the cape, with live coverage ranging between 6.50 and 55.25%. Rhodoliths showed interesting morphostructural differences. They are small compact pralines at the Serpentara Island, associated with gravelly sand, or bigger boxwork at the Santa Caterina shoal associated with sand, whereas branches are reported mostly in the Is Piscadeddus shoal, associated with muddy sand. Both in the Santa Caterina shoal and the Serpentara Island, rhodoliths generally show a spheroidal shape, associated with a mean value of currents of 4.3 and 7.3 cm/s, respectively, up to a maximum of 17.7 cm/s at Serpentara, whereas in the Is Piscadeddus shoal rhodolith shape is variable and current velocity is significantly lower. The different hydrodynamic regime, with a constant current directed SW, which deviates around the cape towards E, is responsible for such morphostructural heterogeneity, with the site of the Serpentara Island being the most exposed to a constant unidirectional and strong current. We can associate current velocity with specific rhodolith morphotypes. The morphostructural definition of the heterogeneity of rhodoliths across large beds must be considered for appropriate management policies.

Except where otherwise noted, this item's license is described as This is an open access article distributed under the Creative Commons Attribution License which permits unrestricted use, distribution, and reproduction in any medium, provided the original work is properly cited.