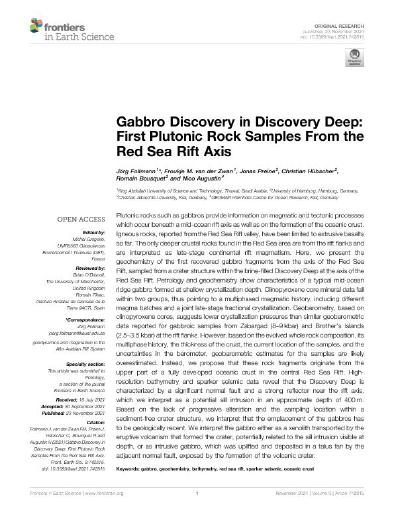 Plutonic rocks such as gabbros provide information on magmatic and tectonic processes which occur beneath a mid-ocean rift axis as well as on the formation of the oceanic crust. Igneous rocks, reported from the Red Sea Rift valley, have been limited to extrusive basalts so far. The only deeper crustal rocks found in the Red Sea area are from the rift flanks and are interpreted as late-stage continental rift magmatism. Here, we present the geochemistry of the first recovered gabbro fragments from the axis of the Red Sea Rift, sampled from a crater structure within the brine-filled Discovery Deep at the axis of the Red Sea Rift. Petrology and geochemistry show characteristics of a typical mid-ocean ridge gabbro formed at shallow crystallization depth. Clinopyroxene core mineral data fall within two groups, thus pointing to a multiphased magmatic history, including different magma batches and a joint late-stage fractional crystallization. Geobarometry, based on clinopyroxene cores, suggests lower crystallization pressures than similar geobarometric data reported for gabbroic samples from Zabargad (8–9 kbar) and Brother’s Islands (2.5–3.5 kbar) at the rift flanks. However, based on the evolved whole rock composition, its multiphase history, the thickness of the crust, the current location of the samples, and the uncertainties in the barometer, geobarometric estimates for the samples are likely overestimated. Instead, we propose that these rock fragments originate from the upper part of a fully developed oceanic crust in the central Red Sea Rift. High-resolution bathymetry and sparker seismic data reveal that the Discovery Deep is characterized by a significant normal fault and a strong reflector near the rift axis, which we interpret as a potential sill intrusion in an approximate depth of 400 m. Based on the lack of progressive alteration and the sampling location within a sediment-free crater structure, we interpret that the emplacement of the gabbros has to be geologically recent. We interpret the gabbro either as a xenolith transported by the eruptive volcanism that formed the crater, potentially related to the sill intrusion visible at depth, or as intrusive gabbro, which was uplifted and deposited in a talus fan by the adjacent normal fault, exposed by the formation of the volcanic crater.

This work is based on the cruise proposal 118H SaltAx, granted by the German Science Foundation via the steering comittee for medium-sized research vessels, 2017.