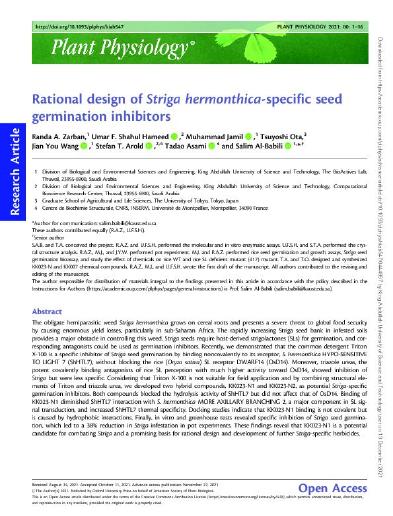 The obligate hemiparasitic weed Striga hermonthica grows on cereal roots and presents a severe threat to global food security by causing enormous yield losses, particularly in Sub-Saharan Africa. The rapidly increasing Striga seed bank in infested soils provides a major obstacle in controlling this weed. Striga seeds require host derived strigolactones (SLs) for germination, and corresponding antagonists could be used as germination inhibitors. Recently, we demonstrated that the common detergent Triton X-100 is a specific inhibitor of Striga seed germination by binding non-covalently to its receptor, Striga hermonthica HYPO-SENSITIVE TO LIGHT 7 (ShHTL7), without blocking the rice (Oryza sativa) SL receptor DWARF14 (OsD14). Moreover, triazole ureas, the potent covalently binding antagonists of rice SL perception with much higher activity towards OsD14, showed inhibition of Striga but were less specific. Considering that Triton X-100 is not suitable for field application and by combining structural elements of Triton and triazole urea, we developed two hybrid compounds, KK023-N1 and KK023-N2, as potential Striga-specific germination inhibitors. Both compounds blocked the hydrolysis activity of ShHTL7 but did not affect that of OsD14. Binding of KK023-N1 diminished ShHTL7 interaction with Striga hermonthica MORE AXILLARY BRANCHING 2 (ShMAX2), a major component in SL signal transduction, and increased ShHTL7 thermal specificity. Docking studies indicate that KK023-N1 binding is not covalent but is caused by hydrophobic interactions. Finally, in vitro and greenhouse tests revealed specific inhibition of Striga seed germination, which led to a 38% reduction in Striga infestation in pot experiments. These findings reveal that KK023-N1 is a potential candidate for combating Striga and a promising basis for rational design and development of further Striga-specific herbicides.

We are grateful to Prof. Abdel Gabar Babiker, The National Research Center, Sudan for providing S. hermonthica seeds. We also appreciate kind help of Prof. Steven Runo, Kenyatta University Kenya for providing another batch of S. hermonthica seeds. We are thankful to Dr Jonne Rodenburg, Africa Rice, Tanzania for providing seeds of rice cv IAC-165. We thank Dr Boubacar A. Kountché for valuable discussions. We acknowledge SOLEIL for provision of synchrotron radiation facilities and we would like to thank L. Chavas, P. Legrand, S. Sirigu, and P. Montaville for assistance in using beamline PROXIMA 1, G. Fox, M. Savko, and B. Shepard for assistance in using beamline PROXIMA 2A, and J. Perez and A. Thureau for assistance in using the beamline SWING.
Funding This study was supported by the Bill & Melinda Gates Foundation grant OPP1194472 given to Salim Al-Babili, and King Abdullah University of Science and Technology (KAUST) baseline funding given to Salim Al-Babili and Stefan Arold. Funds were also obtained from the Core Research for Evolutional Science and Technology (CREST) Program, the SATREPS Program of the Japan Science and Technology Agency (JST), and two JSPS Grant-in-Aid for Scientific Research (grant numbers 18H03939 and 18H05266) given to Tadao Asami.