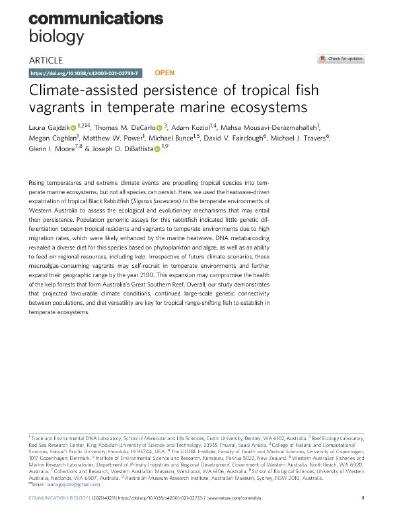 AbstractRising temperatures and extreme climate events are propelling tropical species into temperate marine ecosystems, but not all species can persist. Here, we used the heatwave-driven expatriation of tropical Black Rabbitfish (Siganus fuscescens) to the temperate environments of Western Australia to assess the ecological and evolutionary mechanisms that may entail their persistence. Population genomic assays for this rabbitfish indicated little genetic differentiation between tropical residents and vagrants to temperate environments due to high migration rates, which were likely enhanced by the marine heatwave. DNA metabarcoding revealed a diverse diet for this species based on phytoplankton and algae, as well as an ability to feed on regional resources, including kelp. Irrespective of future climate scenarios, these macroalgae-consuming vagrants may self-recruit in temperate environments and further expand their geographic range by the year 2100. This expansion may compromise the health of the kelp forests that form Australia’s Great Southern Reef. Overall, our study demonstrates that projected favourable climate conditions, continued large-scale genetic connectivity between populations, and diet versatility are key for tropical range-shifting fish to establish in temperate ecosystems.

We are grateful to Heather Dunham, Scott Bennett, Thomas Wernberg, Megan Huggett, Rob Czarnik, Jacquelyn Jones, Sam Moyle, Samuel Payet, Maarten De Brauwer, Jack Parker, and Sue Morrison for providing assistance in the field or in the lab. We also thank the staff of the Aquatic Science and Assessment Division at the Western Australian Department of Primary Industries and Regional Development, particularly Chris Dowling, and the crew of the RV Naturaliste. For molecular guidance in their genotyping service, we thank DArTseq and Andrzej Killian. This work was also supported by resources provided by the Pawsey Supercomputing Centre with funding from the Australian Government and the Government of Western Australia. This project was funded by the Wallonia-Brussels Federation via a grant of Excellency for postdoctoral research to L.G. This work was also supported by ARC Linkage Projects (LP160100839 and LP160101508) to J.D.D. and M.B., a Curtin University Early Career Research Fellowship to J.D.D., and a Curtin University award for publication in Science to J.D.D. The Chevron-operated Wheatstone Project’s State Environmental Offsets Program funded Pilbara and Gascoyne sample collections as did the Woodside-operated Pluto Project for the State Environmental Offsets Program administered by the Department of Biodiversity, Conservation and Attractions (DBCA). Most fish samples were collected under fisheries exemption permit #2632 issued by the Department of Fisheries WA and the WA Department of Parks and Wildlife (DPAW) license to take fauna for scientific purposes - regulation 17 - (#01-000039-1), and ethically approved (#AEC201527) by the Animal Ethics Committee at Curtin University (Australia). The permit, license, and ethics approvals were issued to J.D.D. Recreational fishers donated the remaining fish samples. The kelp samples were collected under a DPAW - regulation 4 - license (#CE005834) and a WA Fisheries exemption permit (#3321) to Thomas Wernberg (University of Western Australia).