How often should dead-reckoned animal movement paths be corrected for drift? 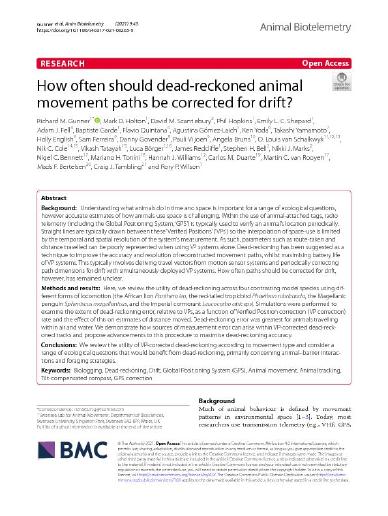 Abstract Background Understanding what animals do in time and space is important for a range of ecological questions, however accurate estimates of how animals use space is challenging. Within the use of animal-attached tags, radio telemetry (including the Global Positioning System, ‘GPS’) is typically used to verify an animal’s location periodically. Straight lines are typically drawn between these ‘Verified Positions’ (‘VPs’) so the interpolation of space-use is limited by the temporal and spatial resolution of the system’s measurement. As such, parameters such as route-taken and distance travelled can be poorly represented when using VP systems alone. Dead-reckoning has been suggested as a technique to improve the accuracy and resolution of reconstructed movement paths, whilst maximising battery life of VP systems. This typically involves deriving travel vectors from motion sensor systems and periodically correcting path dimensions for drift with simultaneously deployed VP systems. How often paths should be corrected for drift, however, has remained unclear. Methods and results Here, we review the utility of dead-reckoning across four contrasting model species using different forms of locomotion (the African lion Panthera leo, the red-tailed tropicbird Phaethon rubricauda, the Magellanic penguin Spheniscus magellanicus, and the imperial cormorant Leucocarbo atriceps). Simulations were performed to examine the extent of dead-reckoning error, relative to VPs, as a function of Verified Position correction (VP correction) rate and the effect of this on estimates of distance moved. Dead-reckoning error was greatest for animals travelling within air and water. We demonstrate how sources of measurement error can arise within VP-corrected dead-reckoned tracks and propose advancements to this procedure to maximise dead-reckoning accuracy. Conclusions We review the utility of VP-corrected dead-reckoning according to movement type and consider a range of ecological questions that would benefit from dead-reckoning, primarily concerning animal–barrier interactions and foraging strategies.

This research contributes to the CAASE project funded by King Abdullah University of Science and Technology (KAUST) under the KAUST Sensor Initiative. Fieldwork in the Kgalagadi Transfrontier Park was supported in part by a Department for Economy Global Challenges Research Fund grant to MS. Fieldwork within the Chubut Province was supported in part by the National Agency for Scientific and Technological Promotion of Argentina (PICT 2017-1996 and PICT 2018-1480), and the Grants-in-Aid for Scientific Research from the Japan Society for the Promotion of Science (16K18617, 16H06541). Fieldwork at Round Island, Mauritius, was supported by the European Research Council under the European Union’s Horizon 2020 research and innovation programme grant (715874), awarded to ELCS.