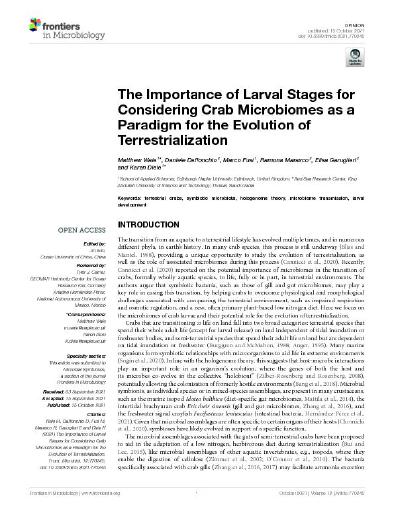 The transition from an aquatic to a terrestrial lifestyle has evolved multiple times, and in numerous different phyla, in earth’s history. In many crab species, this process is still underway (Bliss and Mantel, 1968), providing a unique opportunity to study the evolution of terrestrialization, as well as the role of associated microbiomes during this process (Cannicci et al., 2020). Recently, Cannicci et al. (2020) reported on the potential importance of microbiomes in the transition of crabs, formally wholly aquatic species, to life, fully or in part, in terrestrial environments. The authors argue that symbiotic bacteria, such as those of gill and gut microbiomes, may play a key role in easing this transition, by helping crabs to overcome physiological and morphological challenges associated with conquering the terrestrial environment, such as impaired respiration and osmotic regulation, and a new, often primary plant-based low nitrogen diet. Here we focus on the microbiomes of crab larvae and their potential role for the evolution of terrestrialization. Crabs that are transitioning to life on land fall into two broad categories: terrestrial species that spend their whole adult life (except for larval release) on land independent of tidal inundation or freshwater bodies, and semi-terrestrial species that spend their adult life on land but are dependent on tidal inundation or freshwater (Burggren and McMahon, 1988; Anger, 1995). Many marine organisms form symbiotic relationships with microorganisms to aid life in extreme environments (Sogin et al., 2020). In line with the hologenome theory, this suggests that host-microbe interactions play an important role in an organism’s evolution, where the genes of both the host and its microbes co-evolve in the collective “holobiont” (Zilber-Rosenberg and Rosenberg, 2008), potentially allowing the colonization of formerly hostile environments (Bang et al., 2018). Microbial symbionts, as individual species or in mixed-species assemblages, are present in many crustaceans, such as the marine isopod Idotea balthica (diet-specific gut microbiomes, Mattila et al., 2014), the intertidal brachyuran crab Eriocheir sinensis (gill and gut microbiomes, Zhang et al., 2016), and the freshwater signal crayfish Pacifastacus leniusculus (intestinal bacteria, Hernández-Pérez et al., 2021). Given that microbial assemblages are often specific to certain organs of their hosts (Chomicki et al., 2020), symbioses have likely evolved in support of a specific function. The microbial assemblages associated with the guts of semi-terrestrial crabs have been proposed to aid in the adaptation of a low nitrogen, herbivorous diet during terrestrialization (Bui and Lee, 2015), like microbial assemblages of other aquatic invertebrates, e.g., isopods, where they enable the digestion of cellulose (Zimmer et al., 2002; O’Connor et al., 2014). The bacteria specifically associated with crab gills (Zhang et al., 2016, 2017) may facilitate ammonia excretion (Weihrauch et al., 2004), utilize gaseous CO2 (Morris, 2001), and buffer exposure to oxygen, which occurs at a concentration 30 times higher (Hsia et al., 2013) in the terrestrial compared to the marine environment where the host organism evolved. The microbiomes of both gut and gills could therefore provide terrestrial and semi-terrestrial crabs (here collectively called semi-/terrestrial) with means to cope with life in marine as well as in terrestrial environments. Whilst the presence of microbiomes and their role in buffering the stresses imposed on crabs by terrestrialization is beginning to be discussed (Bui and Lee, 2015; Cannicci et al., 2020), there are many unknowns. For example, the mode of bacterial acquisition, bacterial diversity, topological association, and the precise functions of their organ-specific microbial assemblages are still poorly understood, both for adult semi-/terrestrial crabs and their early life stages. Most semi-/terrestrial crab species, like their aquatic counterparts, have a biphasic life cycle including fully aquatic larvae, via which they transition to semi-/terrestrial juvenile/adult life (Anger, 1995; Hartnoll etal.,2014).Understanding microbial colonization of the larvae would likely provide critical insights into how these crabs have been able to move from water to land, and whether the bacteria themselves facilitate this transition.

The authors would like to acknowledge the support of their host institutions and colleagues from the Extreme Systems Microbiology lab for helpful discussion.