The Simrad EK60 echosounder dataset from the Malaspina circumnavigation 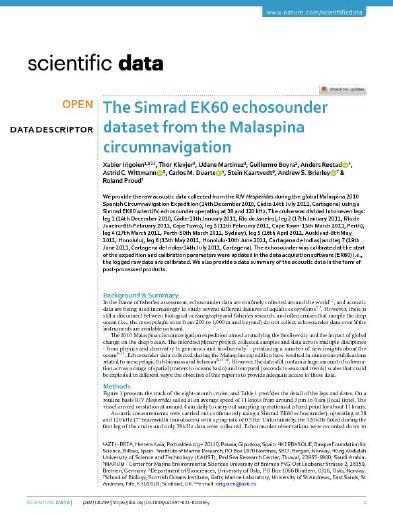 Thanks are due to all participants in the cruise, particularly the UTM responsible for the operation of the instruments on board, and crew of the R/V Hesperides. The Malaspina Expedition was funded by the Spanish Ministry of Economy and Competitiveness through the Malaspina 2010 expedition project (Consolider-Ingenio 2010, CSD2008-00077), the Fundación BBVA, CSIC, the Spanish Institute of Oceanography, AZTI Foundation, the universities of Granada, Cadiz, Basque Country and Barcelona and the King Abdullah University of Science and Technology. Data have been made available through the EU funded project SUMMER (H2020-BG-2018-2, proposal number: 817806-2)