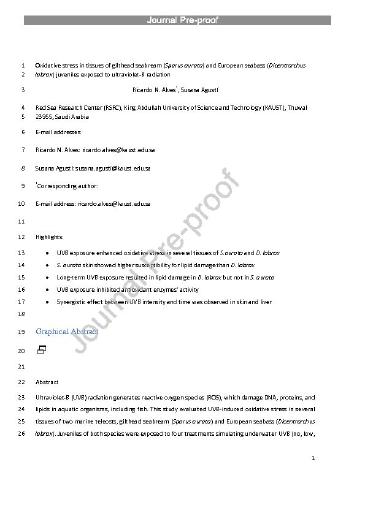 Ultraviolet-B (UVB) radiation generates reactive oxygen species (ROS), which damage DNA, proteins, and lipids in aquatic organisms, including fish. This study evaluated UVB-induced oxidative stress in several tissues of two marine teleosts, gilthead seabream (Sparus aurata) and European seabass (Dicentrarchus labrax). Juveniles of both species were exposed to four treatments simulating underwater UVB (no, low, moderate, and high UVB) doses for 6 weeks. Oxidative stress (the activities of several antioxidant enzymes (catalase, CAT; glutathione-S-transferase, GST; superoxide dismutase, SOD, and lipid peroxidation, LPO) were analyzed in the skin, liver, head kidney, gills, muscle, brain, intestine, spleen, and kidney samples obtained at increasing exposure times (3-43 days). UVB exposure induced significant lipid damage and antioxidant responses in several tissues, with the skin showing more pronounced effects in S. aurata than in D. labrax. In the skin of both species and in the liver of D. labrax, LPO levels significantly increased with increasing UVB intensity and exposure time. CAT activity was inhibited in both species (i.e., in liver, skin, head kidney, gills, spleen, and brain) of UVB exposed fish. SOD activity significantly decreased in the skin and head kidney of D. labrax; however, prolonged exposure time was required for significant effects in the skin and gills of S. aurata. GST activity reduced early in the skin of S. aurata, whereas significant effects were noted in the head kidney and brain at the end of experiment. An interactive effect between UVB intensity and exposure time was observed in the skin (seabream and seabass) and liver (seabass). Our results indicated that oxidative stress is induced in the skin as well as indirectly exposed tissues in S. aurata and D. labrax after UVB exposure at the subsurface of transparent seas.

The authors would like to acknowledge the Coastal and Marine Resources Core Lab (CMOR) at King Abdullah University of Science and Technology (KAUST). We thank Abdulaziz Al Suwailem, Asaad H. Mahamed, Jorge F. Alarcon, and Joseph Leopoldo Q. Laranja (Beacon Development, Saudi Arabia) for their assistance with the tank's experimental setup, transport of seabream and seabass from the fish farms to the lab, and maintenance during the quarantine period. We also thank Micaela S. S. Justo, Sebastian Overmans, Muhammad Danial A. Nor Azli, and Nurhisham Razali for their help with fish maintenance and sampling during the experiment. Finally, the authors would like to acknowledge Tharawat Seas Company and Tabuk Fisheries Company for providing the fish used in this study.

Journal of Photochemistry and Photobiology

Except where otherwise noted, this item's license is described as This is a PDF file of an article that has undergone enhancements after acceptance, such as the addition of a cover page and metadata, and formatting for readability, but it is not yet the definitive version of record. This version will undergo additional copyediting, typesetting and review before it is published in its final form, but we are providing this version to give early visibility of the article. Please note that, during the production process, errors may be discovered which could affect the content, and all legal disclaimers that apply to the journal pertain