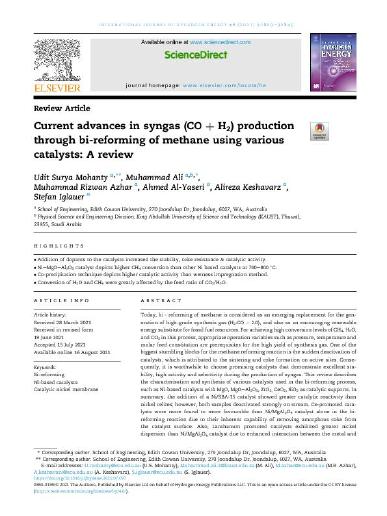 Today, bi - reforming of methane is considered as an emerging replacement for the generation of high-grade synthesis gas (H2:CO = 2.0), and also as an encouraging renewable energy substitute for fossil fuel resources. For achieving high conversion levels of CH4, H2O, and CO2 in this process, appropriate operation variables such as pressure, temperature and molar feed constitution are prerequisites for the high yield of synthesis gas. One of the biggest stumbling blocks for the methane reforming reaction is the sudden deactivation of catalysts, which is attributed to the sintering and coke formation on active sites. Consequently, it is worthwhile to choose promising catalysts that demonstrate excellent stability, high activity and selectivity during the production of syngas. This review describes the characterisation and synthesis of various catalysts used in the bi-reforming process, such as Ni-based catalysts with MgO, MgO–Al2O3, ZrO2, CeO2, SiO2 as catalytic supports. In summary, the addition of a Ni/SBA-15 catalyst showed greater catalytic reactivity than nickel celites; however, both samples deactivated strongly on stream. Ce-promoted catalysts were more found to more favourable than Ni/MgAl2O4 catalyst alone in the bi-reforming reaction due to their inherent capability of removing amorphous coke from the catalyst surface. Also, Lanthanum promoted catalysts exhibited greater nickel dispersion than Ni/MgAl2O4 catalyst due to enhanced interaction between the metal and support. Furthermore, La2O3 addition was found to improve the selectivity, activity, sintering and coking resistance of Ni implanted within SiO2. Non-noble metal-based carbide catalysts were considered to be active and stable catalysts for bi-reforming reactions. Interestingly, a five-fold increase in the coking resistance of the nickel catalyst with Al2O3 support was observed with incorporation of Cr, La2O3 and Ba for a continuous reaction time of 140 h. Bi-reforming for 200 h with Ni-γAl2O3 catalyst promoted 98.3% conversion of CH4 and CO2 conversion of around 82.4%. Addition of MgO to the Ni catalyst formed stable MgAl2O4 spinel phase at high temperatures and was quite effective in preventing coke formation due to enhancement in the basicity on the surface of catalyst. Additionally, the distribution of perovskite oxides over 20 wt % silicon carbide-modified with aluminium oxide supports promoted catalytic activity. NdCOO3 catalysts were found to be promising candidates for longer bi-reforming operations.

Addition of lanthanum to Ni/AlO catalysts inhibited the agglomeration of Ni particles due to the enhancement of strong metal to support interaction (SMSI). SMSI of catalysts was reported to enhance thermal stability [ 145–147]. Park et al. [148], synthesized 10 wt % Nickel–xLanthanum/MgAlO catalysts where x ranges from 0 to 5% by the co-impregnation technique during the bi-reforming of coke oven gas (COG). They conducted aging treatment with a H: HO: N ratio of 1:10:1.25 with temperature around 900°C run for 50 h. The results revealed an increase in the Ni crystallite size for all the investigated catalysts subjected to ageing. Furthermore, the lanthanum promoted catalysts exhibited greater nickel dispersion than Ni/MgAlO catalyst due to their enhanced interactions between the metal and support. Results from catalytic tests performed at 900°C and at a pressure of 5 atmospheric pressure for 40 h with a CH: HO: CO:H:CO: N ratio of 1:1.2:0.4:2:0.3:0.3 also revealed that aged Ni–2.5La/MgAlO catalyst showed maximum sinter stability and activity due to its enhanced nickel dispersion and surface area.The authors gratefully acknowledge the support from Edith Cowan University, Western Australia, Australia.

Except where otherwise noted, this item's license is described as This is an open access article under the CC BY license