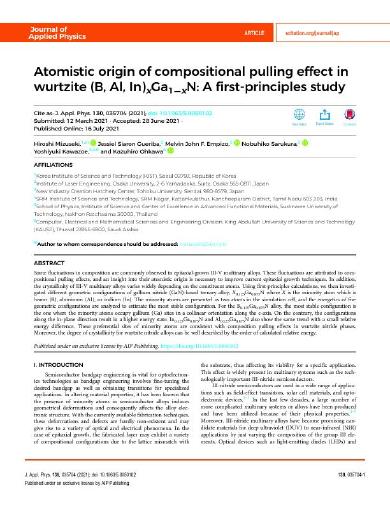 Some fluctuations in composition are commonly observed in epitaxial-grown III-V multinary alloys. These fluctuations are attributed to compositional pulling effects, and an insight into their atomistic origin is necessary to improve current epitaxial growth techniques. In addition, the crystallinity of III-V multinary alloys varies widely depending on the constituent atoms. Using first-principles calculations, we then investigated different geometric configurations of gallium nitride (GaN)-based ternary alloy, X0.125Ga0.875N where X is the minority atom which is boron (B), aluminum (Al), or indium (In). The minority atoms are presented as two atoms in the simulation cell, and the energetics of five geometric configurations are analyzed to estimate the most stable configuration. For the B0.125Ga0.875N alloy, the most stable configuration is the one where the minority atoms occupy gallium (Ga) sites in a collinear orientation along the c-axis. On the contrary, the configurations along the in-plane direction result in a higher energy state. In0.125Ga0.875N and Al0.125Ga0.875N also show the same trend with a small relative energy difference. These preferential sites of minority atoms are consistent with composition pulling effects in wurtzite nitride phases. Moreover, the degree of crystallinity for wurtzite nitride alloys can be well described by the order of calculated relative energy.

This work was supported by the Korea Institute of Science and Technology (Grant Nos. 2Z05840 and 2E31201), the Joint Usage/Research Center for Interdisciplinary Large-scale Information Infrastructures (JHPCN) (Project jh190019), the High-Performance Computing Infrastructure (HPCI) (Project Nos. hp190014, hp190111, and hp200040), the GIMRT Program of the Institute for Materials Research, Tohoku University (Proposal Nos. 20S0508 and 202012-SCKXX-0026), and the Japanese Ministry of Education, Culture, Sports, Science and Technology (MEXT) through the Program for Creation of Research Platforms and Sharing of Advanced Research Facilities (Photon Beam Platform).