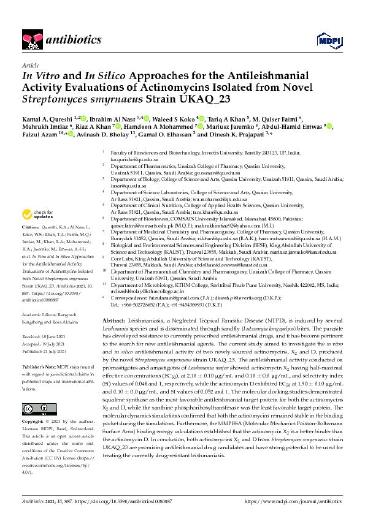 Leishmaniasis, a Neglected Tropical Parasitic Disease (NTPD), is induced by several Leishmania species and is disseminated through sandfly (Lutzomyia longipalpis) bites. The parasite has developed resistance to currently prescribed antileishmanial drugs, and it has become pertinent to the search for new antileishmanial agents. The current study aimed to investigate the in vitro and in silico antileishmanial activity of two newly sourced actinomycins, X2 and D, produced by the novel Streptomyces smyrnaeus strain UKAQ_23. The antileishmanial activity conducted on promastigotes and amastigotes of Leishmania major showed actinomycin X2 having half-maximal effective concentrations (EC50), at 2.10 ± 0.10 μg/mL and 0.10 ± 0.0 μg/mL, and selectivity index (SI) values of 0.048 and 1, respectively, while the actinomycin D exhibited EC50 at 1.90 ± 0.10 μg/mL and 0.10 ± 0.0 μg/mL, and SI values of 0.052 and 1. The molecular docking studies demonstrated squalene synthase as the most favorable antileishmanial target protein for both the actinomycins X2 and D, while the xanthine phosphoribosyltransferase was the least favorable target protein. The molecular dynamics simulations confirmed that both the actinomycins remained stable in the binding pocket during the simulations. Furthermore, the MMPBSA (Molecular Mechanics Poisson-Boltzmann Surface Area) binding energy calculations established that the actinomycin X2 is a better binder than the actinomycin D. In conclusion, both actinomycins X2 and D from Streptomyces smyrnaeus strain UKAQ_23 are promising antileishmanial drug candidates and have strong potential to be used for treating the currently drug-resistant leishmaniasis.