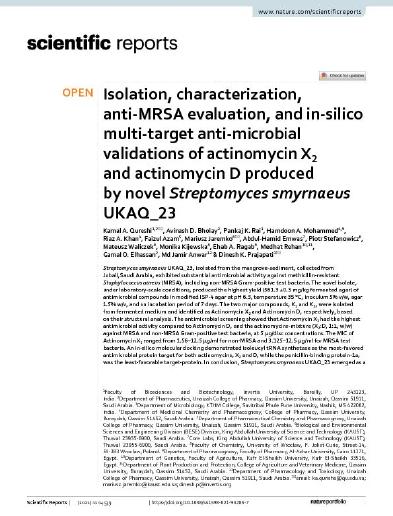 Streptomyces smyrnaeus UKAQ_23, isolated from the mangrove-sediment, collected from Jubail,Saudi Arabia, exhibited substantial antimicrobial activity against methicillin-resistant Staphylococcus aureus (MRSA), including non-MRSA Gram-positive test bacteria. The novel isolate, under laboratory-scale conditions, produced the highest yield (561.3 ± 0.3 mg/kg fermented agar) of antimicrobial compounds in modified ISP-4 agar at pH 6.5, temperature 35 °C, inoculum 5% v/w, agar 1.5% w/v, and an incubation period of 7 days. The two major compounds, K1 and K2, were isolated from fermented medium and identified as Actinomycin X2 and Actinomycin D, respectively, based on their structural analysis. The antimicrobial screening showed that Actinomycin X2 had the highest antimicrobial activity compared to Actinomycin D, and the actinomycins-mixture (X2:D, 1:1, w/w) against MRSA and non-MRSA Gram-positive test bacteria, at 5 µg/disc concentrations. The MIC of Actinomycin X2 ranged from 1.56–12.5 µg/ml for non-MRSA and 3.125–12.5 µg/ml for MRSA test bacteria. An in-silico molecular docking demonstrated isoleucyl tRNA synthetase as the most-favored antimicrobial protein target for both actinomycins, X2 and D, while the penicillin-binding protein-1a, was the least-favorable target-protein. In conclusion, Streptomyces smyrnaeus UKAQ_23 emerged as a promising source of Actinomycin X2 with the potential to be scaled up for industrial production, which could benefit the pharmaceutical industry.

Researchers would like to thank the King Abdullah University of Science and Technology (KAUST), Thuwal, Saudi Arabia for providing the financial support. The authors also extend their thanks to the College of Pharmacy, Main Campus, and Unaizah College of Pharmacy, Qassim University, Saudi Arabia, and Faculty of Biosciences and Biotechnology, Invertis University, Bareilly, UP, India for technical support. The authors are also grateful to Andrzej Reszka (Shim-Pol, Poland) for providing the Shimadzu LCMS-IT-TOF and LCMS 9030 Q-TOF instruments.