Diversity, host specificity and biogeography in the Cladocorynidae (Hydrozoa, Capitata), with description of a new genus 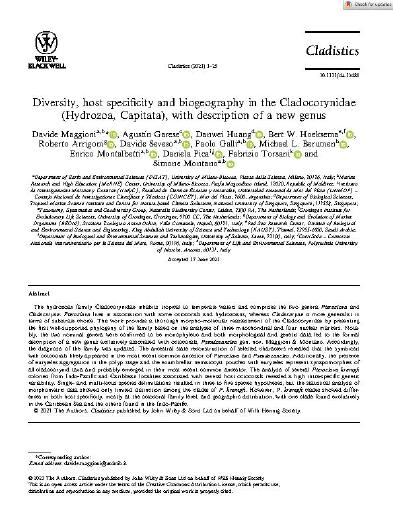 The hydrozoan family Cladocorynidae inhabits tropical to temperate waters and comprises the two genera Pteroclava and Cladocoryne. Pteroclava lives in association with some octocorals and hydrozoans, whereas Cladocoryne is more generalist in terms of substrate choice. This work provides a thorough morpho-molecular reassessment of the Cladocorynidae by presenting the first well-supported phylogeny of the family based on the analyses of three mitochondrial and four nuclear markers. Notably, the two nominal genera were confirmed to be monophyletic and both morphological and genetic data led to the formal description of a new genus exclusively associated with octocorals, Pseudozanclea gen. nov. Maggioni & Montano. Accordingly, the diagnosis of the family was updated. The ancestral state reconstruction of selected characters revealed that the symbiosis with octocorals likely appeared in the most recent common ancestor of Pteroclava and Pseudozanclea. Additionally, the presence of euryteles aggregation in the polyp stage and the exumbrellar nematocyst pouches with euryteles represent synapomorphies of all cladocorynid taxa and probably emerged in their most recent common ancestor. The analysis of several Pteroclava krempfi colonies from Indo-Pacific and Caribbean localities associated with several host octocorals revealed a high intra-specific genetic variability. Single- and multi-locus species delimitations resulted in three to five species hypotheses, but the statistical analysis of morphometric data showed only limited distinction among the clades of P. krempfi. However, P. krempfi clades showed differences in both host specificity, mostly at the octocoral family level, and geographic distribution, with one clade found exclusively in the Caribbean Sea and the others found in the Indo-Pacific.

Except where otherwise noted, this item's license is described as This is an open access article under the terms of the Creative Commons Attribution License, which permits use,distribution and reproduction in any medium, provided the original work is properly cited.