A comparative baseline of coral disease in three regions along the Saudi Arabian coast of the central Red Sea. 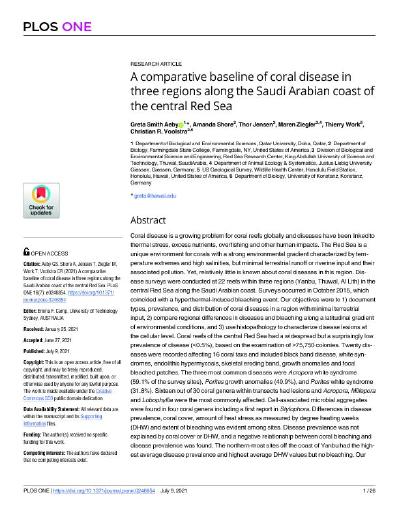 Coral disease is a growing problem for coral reefs globally and diseases have been linked to thermal stress, excess nutrients, overfishing and other human impacts. The Red Sea is a unique environment for corals with a strong environmental gradient characterized by temperature extremes and high salinities, but minimal terrestrial runoff or riverine input and their associated pollution. Yet, relatively little is known about coral diseases in this region. Disease surveys were conducted at 22 reefs within three regions (Yanbu, Thuwal, Al Lith) in the central Red Sea along the Saudi Arabian coast. Surveys occurred in October 2015, which coincided with a hyperthermal-induced bleaching event. Our objectives were to 1) document types, prevalence, and distribution of coral diseases in a region with minimal terrestrial input, 2) compare regional differences in diseases and bleaching along a latitudinal gradient of environmental conditions, and 3) use histopathology to characterize disease lesions at the cellular level. Coral reefs of the central Red Sea had a widespread but a surprisingly low prevalence of disease (75,750 colonies. Twenty diseases were recorded affecting 16 coral taxa and included black band disease, white syndromes, endolithic hypermycosis, skeletal eroding band, growth anomalies and focal bleached patches. The three most common diseases were Acropora white syndrome (59.1% of the survey sites), Porites growth anomalies (40.9%), and Porites white syndrome (31.8%). Sixteen out of 30 coral genera within transects had lesions and Acropora, Millepora and Lobophyllia were the most commonly affected. Cell-associated microbial aggregates were found in four coral genera including a first report in Stylophora. Differences in disease prevalence, coral cover, amount of heat stress as measured by degree heating weeks (DHW) and extent of bleaching was evident among sites. Disease prevalence was not explained by coral cover or DHW, and a negative relationship between coral bleaching and disease prevalence was found. The northern-most sites off the coast of Yanbu had the highest average disease prevalence and highest average DHW values but no bleaching. Our study provides a foundation and baseline data for coral disease prevalence in the central Red Sea, which is projected to increase as a consequence of increased frequency and severity of ocean warming.

The author(s) received no specific funding for this work.

Except where otherwise noted, this item's license is described as This is an open access article, free of all copyright, and may be freely reproduced, distributed, transmitted, modified, built upon, or otherwise used by anyone for any lawful purpose. The work is made available under the Creative Commons CC0 public domain dedication.