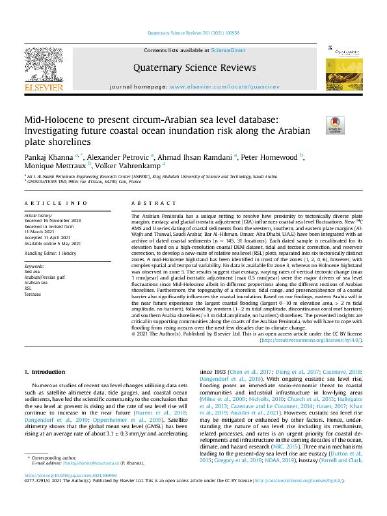 The Arabian Peninsula has a unique setting to resolve how proximity to tectonically diverse plate margins, eustacy, and glacial isostatic adjustment (GIA) influences coastal sea level fluctuations. New 14C AMS and U series dating of coastal sediments from the western, southern, and eastern plate margins (Al-Wajh and Thuwal, Saudi Arabia; Bar Al-Hikman, Oman; Abu Dhabi, U.A.E) have been integrated with an archive of dated coastal sediments (n = 145, 31 locations). Each dated sample is recalibrated for its elevation based on a high-resolution coastal. DEM dataset, tidal and tectonic correction, and reservoir correction, to develop a new-suite of relative sea level (RSL) plots, separated into six tectonically distinct zones. A mid-Holocene highstand has been identified in most of the zones (1, 2, 4, 6), however, with complex spatial and temporal variability. No data is available for zone 3, whereas no Holocene highstand was observed in zone 5. The results suggest that eustacy, varying rates of vertical tectonic change (max 1 mm/year) and glacial isostatic adjustment (max 0.5 mm/year) were the major drivers of sea level fluctuations since Mid-Holocene albeit in different proportions along the different sections of Arabian shorelines. Furthermore, the topography of a shoreline, tidal range, and presence/absence of a coastal barrier also significantly influences the coastal inundation. Based on our findings, eastern Arabia will in the near future experience the largest coastal flooding (largest 0–10 m elevation area, > 2 m tidal amplitude, no barriers), followed by western (1–2 m tidal amplitude, discontinuous coral reef barriers) and southern Arabia shorelines (>3 m tidal amplitude, no barriers) shorelines. The presented insights are critical in supporting communities along the coasts of the Arabian Peninsula, who will have to cope with flooding from rising oceans over the next few decades due to climate change.

Except where otherwise noted, this item's license is described as This is an open access article under the CC BY license.