Multi-domain probiotic consortium as an alternative to chemical remediation of oil spills at coral reefs and adjacent sites. 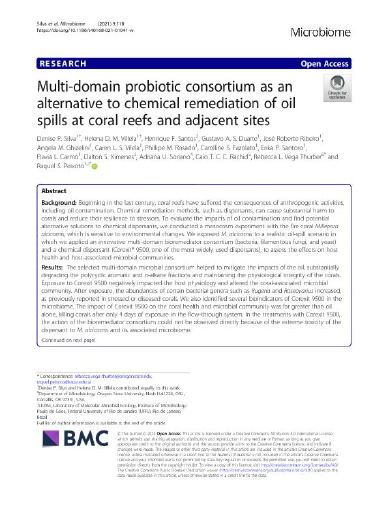 BackgroundBeginning in the last century, coral reefs have suffered the consequences of anthropogenic activities, including oil contamination. Chemical remediation methods, such as dispersants, can cause substantial harm to corals and reduce their resilience to stressors. To evaluate the impacts of oil contamination and find potential alternative solutions to chemical dispersants, we conducted a mesocosm experiment with the fire coral Millepora alcicornis, which is sensitive to environmental changes. We exposed M. alcicornis to a realistic oil-spill scenario in which we applied an innovative multi-domain bioremediator consortium (bacteria, filamentous fungi, and yeast) and a chemical dispersant (Corexit® 9500, one of the most widely used dispersants), to assess the effects on host health and host-associated microbial communities.ResultsThe selected multi-domain microbial consortium helped to mitigate the impacts of the oil, substantially degrading the polycyclic aromatic and n-alkane fractions and maintaining the physiological integrity of the corals. Exposure to Corexit 9500 negatively impacted the host physiology and altered the coral-associated microbial community. After exposure, the abundances of certain bacterial genera such as Rugeria and Roseovarius increased, as previously reported in stressed or diseased corals. We also identified several bioindicators of Corexit 9500 in the microbiome. The impact of Corexit 9500 on the coral health and microbial community was far greater than oil alone, killing corals after only 4 days of exposure in the flow-through system. In the treatments with Corexit 9500, the action of the bioremediator consortium could not be observed directly because of the extreme toxicity of the dispersant to M. alcicornis and its associated microbiome.ConclusionsOur results emphasize the importance of investigating the host-associated microbiome in order to detect and mitigate the effects of oil contamination on corals and the potential role of microbial mitigation and bioindicators as conservation tools. Chemical dispersants were far more damaging to corals and their associated microbiome than oil, and should not be used close to coral reefs. This study can aid in decision-making to minimize the negative effects of oil and dispersants on coral reefs. Video abstract.

This study received support from the Graduate Programs of Science (Microbiology) and Plant Biotechnology and Bioprocess Engineering (PBV)/Federal University of Rio de Janeiro, the National Council for Scientific and Technological Development (CNPq), the National Council for the Improvement of Higher Education (CAPES), and the Carlos Chagas Filho Foundation for Research Support of Rio de Janeiro State (FAPERJ). This study is part of the PROCORAIS Project sponsored by CENPES/PETROBRAS, agreement number 0050.0090605.14.9, regulated by ANP, the Brazilian National Agency of Petroleum, Natural Gas and Biofuels (ANP Resolution 05/2015).