Spatial Connectivity and Drivers of Shark Habitat Use Within a Large Marine Protected Area in the Caribbean, The Bahamas Shark Sanctuary 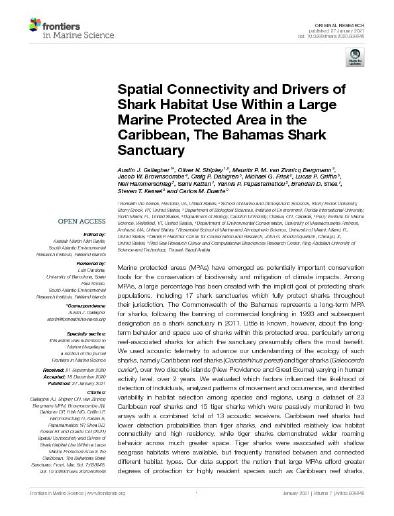 Marine protected areas (MPAs) have emerged as potentially important conservation tools for the conservation of biodiversity and mitigation of climate impacts. Among MPAs, a large percentage has been created with the implicit goal of protecting shark populations, including 17 shark sanctuaries which fully protect sharks throughout their jurisdiction. The Commonwealth of the Bahamas represents a long-term MPA for sharks, following the banning of commercial longlining in 1993 and subsequent designation as a shark sanctuary in 2011. Little is known, however, about the long-term behavior and space use of sharks within this protected area, particularly among reef-associated sharks for which the sanctuary presumably offers the most benefit. We used acoustic telemetry to advance our understanding of the ecology of such sharks, namely Caribbean reef sharks (Carcharhinus perezi) and tiger sharks (Galeocerdo cuvier), over two discrete islands (New Providence and Great Exuma) varying in human activity level, over 2 years. We evaluated which factors influenced the likelihood of detection of individuals, analyzed patterns of movement and occurrence, and identified variability in habitat selection among species and regions, using a dataset of 23 Caribbean reef sharks and 15 tiger sharks which were passively monitored in two arrays with a combined total of 13 acoustic receivers. Caribbean reef sharks had lower detection probabilities than tiger sharks, and exhibited relatively low habitat connectivity and high residency, while tiger sharks demonstrated wider roaming behavior across much greater space. Tiger sharks were associated with shallow seagrass habitats where available, but frequently transited between and connected different habitat types. Our data support the notion that large MPAs afford greater degrees of protection for highly resident species such as Caribbean reef sharks, yet still may provide substantial benefits for more migratory species such as tiger sharks. We discuss these findings within the context of species-habitat linkages, ecosystem services, and the establishment of future MPAs.