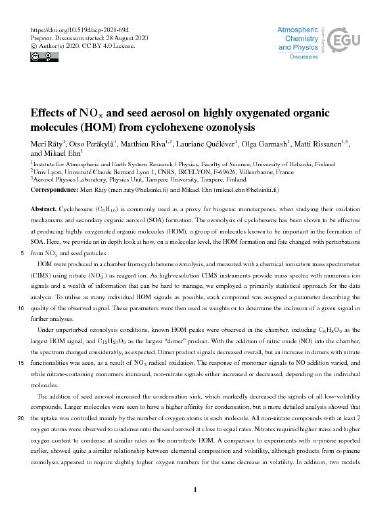 Abstract. Cyclohexene (C6H10) is commonly used as a proxy for biogenic monoterpenes, when studying their oxidation mechanisms and secondary organic aerosol (SOA) formation. The ozonolysis of cyclohexene has been shown to be effective at producing highly oxygenated organic molecules (HOMs), a group of molecules known to be important in the formation of SOA. Here, we provide an in-depth look at how the formation and fate of the broad range of observed HOMs changed with perturbations from NOx and seed particles. HOMs were produced in a chamber from cyclohexene ozonolysis and measured with a chemical ionisation mass spectrometer (CIMS) using nitrate (NO3-) as reagent ion. As high-resolution CIMS instruments provide mass spectra with numerous ion signals and a wealth of information that can be hard to manage, we employed a primarily statistical approach for the data analysis. To utilise as many individual HOM signals as possible, each compound was assigned a parameter describing the quality of the observed signal. These parameters were then used as weights or to determine the inclusion of a given signal in further analyses. Under unperturbed ozonolysis conditions, known HOM peaks were observed in the chamber, including C6H8O9 as the largest HOM signal and C12H20O9 as the largest “dimer” product. With the addition of nitric oxide (NO) into the chamber, the spectrum changed considerably, as expected. Dimer product signals decreased overall, but an increase in dimers with nitrate functionalities was seen, as a result of NO3 radical oxidation. The response of monomer signals to NO addition varied, and while nitrate-containing monomers increased, non-nitrate signals either increased or decreased, depending on the individual molecules. The addition of seed aerosol increased the condensation sink, which markedly decreased the signals of all low-volatility compounds. Larger molecules were seen to have a higher affinity for condensation, but a more detailed analysis showed that the uptake was controlled mainly by the number of oxygen atoms in each molecule. Nitrates required higher mass and higher oxygen content to condense at similar rates as the non-nitrate HOMs. We also tested two existing elemental-composition-based parameterisations for their ability to reproduce the condensation observed in our cyclohexene system. Both predicted higher volatilities than observed, most likely due to the number of oxygen atoms enhancing the product uptake more than the models would suggest.

Except where otherwise noted, this item's license is described as Archived with thanks to Atmospheric Chemistry and Physics