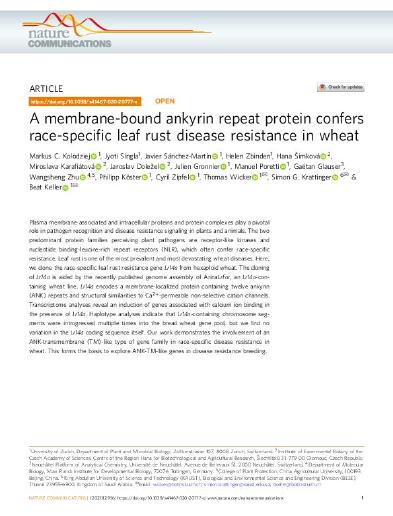 AbstractPlasma membrane-associated and intracellular proteins and protein complexes play a pivotal role in pathogen recognition and disease resistance signaling in plants and animals. The two predominant protein families perceiving plant pathogens are receptor-like kinases and nucleotide binding-leucine-rich repeat receptors (NLR), which often confer race-specific resistance. Leaf rust is one of the most prevalent and most devastating wheat diseases. Here, we clone the race-specific leaf rust resistance gene Lr14a from hexaploid wheat. The cloning of Lr14a is aided by the recently published genome assembly of ArinaLrFor, an Lr14a-containing wheat line. Lr14a encodes a membrane-localized protein containing twelve ankyrin (ANK) repeats and structural similarities to Ca$^{2+}$-permeable non-selective cation channels. Transcriptome analyses reveal an induction of genes associated with calcium ion binding in the presence of Lr14a. Haplotype analyses indicate that Lr14a-containing chromosome segments were introgressed multiple times into the bread wheat gene pool, but we find no variation in the Lr14a coding sequence itself. Our work demonstrates the involvement of an ANK-transmembrane (TM)-like type of gene family in race-specific disease resistance in wheat. This forms the basis to explore ANK-TM-like genes in disease resistance breeding.

The authors would like to thank Gerhard Herren, Lukas Kunz, Luisa K. Schaefer, Esther Jung, Coraline R. Praz, Christoph Stritt, Beatrice Manser, Marion C. Müller, Jonatan Isaksson, Christoph Ringli, Patrick Ackermann, Victoria Widrig, Hanieh Jozevaziri, Jonas Stehlin, Matthias Heuberger, Stefan Lindner, Stephanie Bräunlich, Celia Baroux, and Clara Sanchez for helpful discussions, technical support, and assistance in acquiring necessary techniques and knowledge used in this study. We thank Jan Vrána, Zdeňka Dubská, Romana Šperková, and Jitka Weiserová for the assistance with chromosome sorting and preparation of chromosomal DNA. We would like to thank Hakan Ozkan for information on the Hevidi and Menceki genotypes and provision of diverse durum and wild emmer genotypes, Robert A. McIntosh for discussions about Lr14a resistance phenotypes, Detlef Weigel for discussions about ACD6, the John Innes Centre Germplasm Resource Unit (GRU), Norwich, UK for providing Creso seeds and the gene bank of the Crop Research Institute, Prague, Czech Republic for providing Yaroslav emmer seeds. This project has received funding from the European Union’s Horizon 2020 research and innovation program under the Marie Skłodowska-Curie grant agreement No. 674964, from grant 310030B_182833 by the Swiss National Science Foundation to B Keller, as well as funding by the University of Zurich, and the King Abdullah University of Science and Technology. H.Š., M.K., and J.D. were supported from ERDF project “Plants as a tool for sustainable global development” (No. CZ.02.1.01/0.0/0.0/16_019/0000827). J.G. and P.K. were funded by the European Research Council under the Grant Agreement no. 773153 (grant “IMMUNO-PEPTALK” to C.Z.). J.G. was also supported by a Long-Term Post-Doctoral Fellowship from the European Molecular Biology Organization (EMBO 438-2018).

Except where otherwise noted, this item's license is described as This article is open access licensed under a Creative Commons Attribution 4.0 International License, which permits use, sharing, adaptation, distribution and reproduction in any medium or format, as long as you give appropriate credit to the original author(s) and the source, provide a link to the Creative Commons license, and indicate if changes were made. The images or other third party material in this article are included in the article’s Creative Commons license, unless indicated otherwise in a credit line to the material. If material is not included in the article’s Creative Commons license and your intended use is not permitted by statutory regulation or exceeds the permitted use, you will need to obtain permission directly from the copyright holder.