A high-quality genome assembly and annotation of the gray mangrove, Avicennia marina 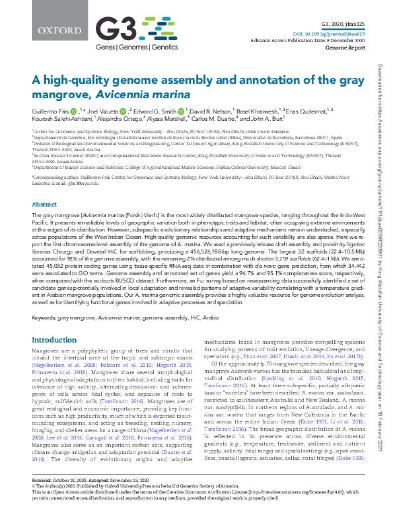 Abstract The gray mangrove [Avicennia marina (Forsk.) Vierh.] is the most widely distributed mangrove species, ranging throughout the Indo-West Pacific. It presents remarkable levels of geographic variation both in phenotypic traits and habitat, often occupying extreme environments at the edges of its distribution. However, subspecific evolutionary relationships and adaptive mechanisms remain understudied, especially across populations of the West Indian Ocean. High-quality genomic resources accounting for such variability are also sparse. Here we report the first chromosome-level assembly of the genome of A. marina. We used a previously release draft assembly and proximity ligation libraries Chicago and Dovetail HiC for scaffolding, producing a 456,526,188-bp long genome. The largest 32 scaffolds (22.4–10.5 Mb) accounted for 98% of the genome assembly, with the remaining 2% distributed among much shorter 3,759 scaffolds (62.4–1 kb). We annotated 45,032 protein-coding genes using tissue-specific RNA-seq data in combination with de novo gene prediction, from which 34,442 were associated to GO terms. Genome assembly and annotated set of genes yield a 96.7% and 95.1% completeness score, respectively, when compared with the eudicots BUSCO dataset. Furthermore, an FST survey based on resequencing data successfully identified a set of candidate genes potentially involved in local adaptation and revealed patterns of adaptive variability correlating with a temperature gradient in Arabian mangrove populations. Our A. marina genomic assembly provides a highly valuable resource for genome evolution analysis, as well as for identifying functional genes involved in adaptive processes and speciation.

The authors are grateful to NYUAD’s Core Bioinformatics for analysis and computational assistance. We thank Mark Priest, Dain McParland, Noura Al-Mansoori, Anique Ahmad, and Ada Kovaliukaite for their participation in the fieldwork. We gratefully acknowledge the Environment Agency Abu Dhabi (permit reference number 20181823a), and the Oman Ministry of Environment and Climate Affairs, Director General of Nature Conservation (permit number: 6210/10/75), for providing permits for research related to this manuscript. We dedicate this manuscript to the memory of Basel Khraiwesh, who had produced the RNA-seq data used for annotation in this study.
This work was supported by New York University Abu Dhabi Institute Grant (73 71210 CGSB9), NYUAD Water Research Center, funded by Tamkeen under the NYUAD Research Institute Award (project CG007), NYUAD Faculty Research Funds (AD060 and AD004), and King Abdullah University of Science and Technology baseline funding to C.M.D.

Except where otherwise noted, this item's license is described as This is an Open Access article distributed under the terms of the Creative Commons Attribution License, which permits unrestricted reuse, distribution, and reproduction in any medium, provided the original work is properly cited.