A histamine-gated channel is an efficient negative selection marker for $\textit{C. elegans}$ transgenesis. 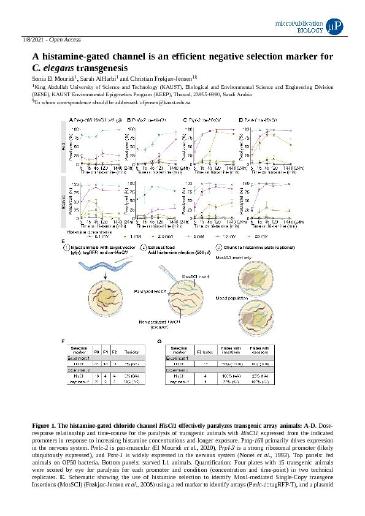 Gene edits are often recovered at high frequency at the population level but only infrequently in individual animals. For example, a single injected C. elegans has on the order of 10,000 F2 progeny, but only a small fraction of these animals will carry the desired genetic modification. Thus, a key challenge for efficient transgenesis is developing methods to easily identify these rare individuals in a sea of wild-type animals. Therefore, positive and negative (or counter-) selection markers play an essential role in gene editing. Positive selection markers confer an advantage to the organism, e.g., the phenotypic rescue of mutant phenotypes or antibiotic resistance. In C. elegans, commonly used phenotypic rescue markers include lin-15 (Clark et al., 1994), pha-1(ts) (Granato et al., 1994), and unc-119 (Maduro and Pilgrim, 1995) or the antibiotic resistance markers hygroR (Radman et al., 2013), NeoR (Giordano-Santini et al., 2010), PuroR (Semple et al., 2010), and BsrR (Kim et al., 2014). In contrast, negative selection markers can be used to avoid false-positive animals that carry positive selection markers but no genetic modification. Such selection is particularly important for transgenic methods based on plasmid injection because extra-chromosomal arrays are often formed and propagated as an intermediate step. For example, targeted insertion of transgenes by MosSCI (Frøkjær-Jensen et al., 2008) and CRISPR (Dickinson et al., 2013) or random transgene insertion by miniMos transposition (Frøkjær-Jensen et al., 2014) all initially establish array lines and subsequently identify edits in animals that have lost the array. Only a few negative selection markers are commonly used. Fluorescent co-injection markers can be used to identify array animals but do not exert selective pressure and require visual screening on a fluorescence microscope. An alternative negative selection strategy relies on inducible expression of a toxin, peel-1, to kill animals with arrays (Frøkjær-Jensen et al., 2012; McDiarmid et al., 2020; Seidel et al., 2011). peel-1 based selection is easily scaled to large populations (i.e., many individual plates) by simple heat-shock. However, the selection has several drawbacks. First, peel-1 is toxic in the absence of heat-shock, which reduces the efficiency of establishing transgenic array animals (Frøkjær-Jensen et al., 2012). Second, the selection is relatively slow because it takes several hours for the toxin to kill animals, and screening is best done the day after heat-shock. Third, and more frustrating, peel-1 selection is often not fully penetrant, and heat-shocked plates frequently contain false positive “escapers”, i.e., array animals that are not killed by the toxin. Therefore, it would be beneficial to have additional negative selection methods to complement or substitute for peel-1 based selection.

Except where otherwise noted, this item's license is described as This is an open-access article distributed under the terms of the Creative Commons Attribution 4.0 International (CC BY 4.0) License, which permits unrestricted use, distribution, and reproduction in any medium, provided the original author and source are credited.