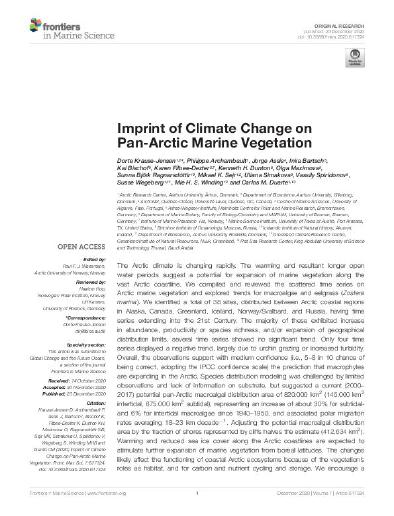 The Arctic climate is changing rapidly. The warming and resultant longer open water periods suggest a potential for expansion of marine vegetation along the vast Arctic coastline. We compiled and reviewed the scattered time series on Arctic marine vegetation and explored trends for macroalgae and eelgrass (Zostera marina). We identified a total of 38 sites, distributed between Arctic coastal regions in Alaska, Canada, Greenland, Iceland, Norway/Svalbard, and Russia, having time series extending into the 21st Century. The majority of these exhibited increase in abundance, productivity or species richness, and/or expansion of geographical distribution limits, several time series showed no significant trend. Only four time series displayed a negative trend, largely due to urchin grazing or increased turbidity. Overall, the observations support with medium confidence (i.e., 5–8 in 10 chance of being correct, adopting the IPCC confidence scale) the prediction that macrophytes are expanding in the Arctic. Species distribution modeling was challenged by limited observations and lack of information on substrate, but suggested a current (2000–2017) potential pan-Arctic macroalgal distribution area of 820.000 km2 (145.000 km2 intertidal, 675.000 km2 subtidal), representing an increase of about 30% for subtidal- and 6% for intertidal macroalgae since 1940–1950, and associated polar migration rates averaging 18–23 km decade–1. Adjusting the potential macroalgal distribution area by the fraction of shores represented by cliffs halves the estimate (412,634 km2). Warming and reduced sea ice cover along the Arctic coastlines are expected to stimulate further expansion of marine vegetation from boreal latitudes. The changes likely affect the functioning of coastal Arctic ecosystems because of the vegetation’s roles as habitat, and for carbon and nutrient cycling and storage. We encourage a pan-Arctic science- and management agenda to incorporate marine vegetation into a coherent understanding of Arctic changes by quantifying distribution and status beyond the scattered studies now available to develop sustainable management strategies for these important ecosystems.

We thank the team involved in sampling at Cape Farewell, Greenland, September 2011: Jens Deding, Signe Høgslund, Michael Bo Rasmussen, and Jozef Wiktor, Jr.; special thanks goes to late Dr. Poul Møller Pedersen, who passed away in June 2012. Gabrielle Martineau is thanked for assistance with data collation. Alexander Kovalevsky is thanked for preparing a map of Russian sites and Tinna Christensen for further graphical assistance. Funding. This study is based on ideas discussed at an international workshop on pan-Arctic marine systems in Motovun, Croatia, organized by P. Wassmann and supported by funding from Arctic SIZE (http://site.uit.no/arcticsize/). The study was further supported by the Independent Research Fund Denmark (8021-00222 B, “CARMA” to DK-J), the Government of Greenland and the Danish Environmental Protection Agency (DANCEA, J.nr. 2019 – 8703 to DK-J, MS, and SW), the EU Horizon 2020 (FACE-IT, contract # 869154 to DK-J, IB, and KB, and INTAROS, contract # 727890 to MS), the Foundation for Science and Technology (FCT) UID/Multi/04326/2019, PTDC/BIA-CBI/6515/2020 and the transitional norm -DL57/2016/CP1361/CT0035 and MARFOR (BIODIVERSA/004/2015) to JA, the Russian Foundation for Basic Research (grant 18-05-70114 to VS, OM, and US). ArcticNet (the ArcticKelp project to PA and KF-D), and the Australian Research Council (DE190100692 to KF-D). The study is a contribution to the Greenland Ecosystem Monitoring Program (http://g-e-m.dk/) through the programs NuukBasis, ZackenbergBasis and DiskoBasis.