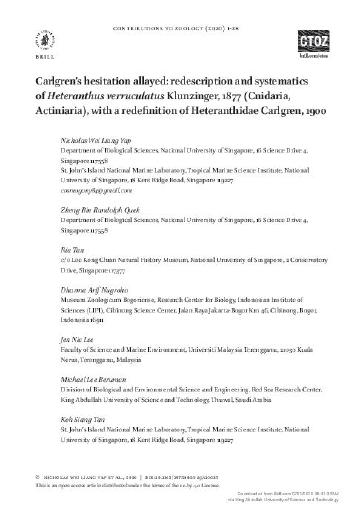 Species boundaries delineating tropical sea anemones (Cnidaria, Actiniaria) of the zooxanthellate genus, Heteranthus Klunzinger, 1877, are unclear. There are currently two valid Heteranthus species: type species Heteranthus verruculatus Klunzinger, 1877, first reported from Koseir, Egypt, and H. insignis Carlgren, 1943, from Poulo Condore, Vietnam. In describing the latter from a single, poorly preserved specimen, zoologist Oskar Carlgren expressed apprehension with traits he had used to establish this species. Carlgren’s doubts persisted later in writing when he found a similar-looking sea anemone from the Great Barrier Reef. Crucial details to positively identify either species have since remained limited. Here, we re-diagnosed Heteranthus and re-described its type species based on observations of specimens we have obtained from Singapore and Pulau Ambon (Indonesia), and of museum material collected elsewhere across the Indo-West Pacific region (n > 180). Supported by molecular phylogenetic evidence, the family Heteranthidae Carlgren, 1900 was reinstated and re-diagnosed. Heteranthus verruculatus is encountered in the lower intertidal region amongst seagrass, in rocky crevices, or coral rubble. It occurs as solitary individuals or in clonal clusters, well-camouflaged against the substratum. Individuals were observed to frequently propagate by longitudinal fission, resulting in a varied appearance. Type material of H. verruculatus and H. insignis were re-examined and as we found no differences between them, the two were synonymised. We inferred that Carlgren probably misinterpreted cnidae and histological data in defining H. insignis as a distinct species. This revision clarifies the taxonomy and geographic range of H. verruculatus, an Indo-West Pacific species that is found from the Red Sea to subtropical Australia and Hawaii.

Except where otherwise noted, this item's license is described as This is an open access article distributed under the terms of the cc-by 4.0 License.