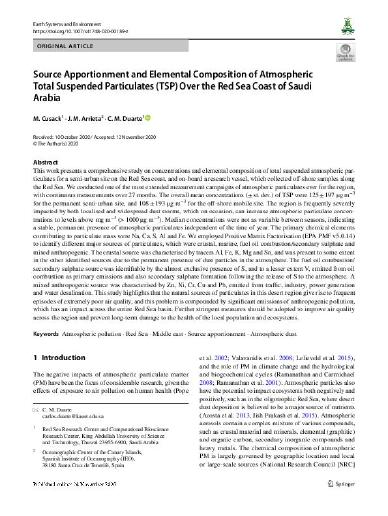 AbstractThis work presents a comprehensive study on concentrations and elemental composition of total suspended atmospheric particulates for a semi-urban site on the Red Sea coast, and on-board a research vessel, which collected off-shore samples along the Red Sea. We conducted one of the most extended measurement campaigns of atmospheric particulates ever for the region, with continuous measurements over 27 months. The overall mean concentrations (± st. dev.) of TSP were 125 ± 197 µg m$^{−3}$ for the permanent semi-urban site, and 108 ± 193 µg m$^{−3}$ for the off-shore mobile site. The region is frequently severely impacted by both localised and widespread dust storms, which on occasion, can increase atmospheric particulate concentrations to levels above mg m$^{−3}$ (> 1000 µg m$^{−3}$). Median concentrations were not as variable between seasons, indicating a stable, permanent presence of atmospheric particulates independent of the time of year. The primary chemical elements contributing to particulate mass were Na, Ca, S, Al and Fe. We employed Positive Matrix Factorisation (EPA PMF v5.0.14) to identify different major sources of particulates, which were crustal, marine, fuel oil combustion/secondary sulphate and mixed anthropogenic. The crustal source was characterised by tracers Al, Fe, K, Mg and Sn, and was present to some extent in the other identified sources due to the permanent presence of dust particles in the atmosphere. The fuel oil combustion/secondary sulphate source was identifiable by the almost exclusive presence of S, and to a lesser extent V, emitted from oil combustion as primary emissions and also secondary sulphate formation following the release of S to the atmosphere. A mixed anthropogenic source was characterised by Zn, Ni, Cr, Cu and Pb, emitted from traffic, industry, power generation and water desalination. This study highlights that the natural sources of particulates in this desert region give rise to frequent episodes of extremely poor air quality, and this problem is compounded by significant emissions of anthropogenic pollution, which has an impact across the entire Red Sea basin. Further stringent measures should be adopted to improve air quality across the region and prevent long-term damage to the health of the local population and ecosystems.

The research in this publication was supported by King Abdullah University of Science and Technology, KAUST, through funding provided to CMD and the Red Sea Research Center. We thank CMOR staf for their assistance in deploying the sampling instruments and Vijayalaxmi Dasari for her help with laboratory analyses.

Except where otherwise noted, this item's license is described as This article is licensed under a Creative Commons Attribution 4.0 International License, which permits use, sharing, adaptation, distribution and reproduction in any medium or format, as long as you give appropriate credit to the original author(s) and the source, provide a link to the Creative Commons licence, and indicate if changes were made. The images or other third party material in this article are included in the article’s Creative Commons licence, unless indicated otherwise in a credit line to the material. If material is not included in the article’s Creative Commons licence and your intended use is notpermitted by statutory regulation or exceeds the permitted use, you will need to obtain permission directly from the copyright holder.