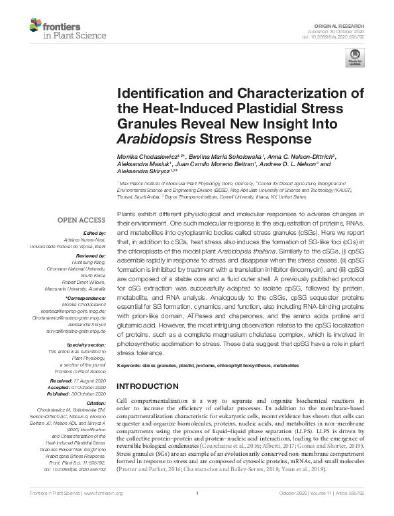 Plants exhibit different physiological and molecular responses to adverse changes in their environment. One such molecular response is the sequestration of proteins, RNAs, and metabolites into cytoplasmic bodies called stress granules (cSGs). Here we report that, in addition to cSGs, heat stress also induces the formation of SG-like foci (cGs) in the chloroplasts of the model plant Arabidopsis thaliana. Similarly to the cSGs, (i) cpSG assemble rapidly in response to stress and disappear when the stress ceases, (ii) cpSG formation is inhibited by treatment with a translation inhibitor (lincomycin), and (iii) cpSG are composed of a stable core and a fluid outer shell. A previously published protocol for cSG extraction was successfully adapted to isolate cpSG, followed by protein, metabolite, and RNA analysis. Analogously to the cSGs, cpSG sequester proteins essential for SG formation, dynamics, and function, also including RNA-binding proteins with prion-like domain, ATPases and chaperones, and the amino acids proline and glutamic acid. However, the most intriguing observation relates to the cpSG localization of proteins, such as a complete magnesium chelatase complex, which is involved in photosynthetic acclimation to stress. These data suggest that cpSG have a role in plant stress tolerance.

We would like to acknowledge Prof. Alisdair Fernie for critical discussion of our work, Änne Michaelis for technical support (metabolite measurement), and Stella Kössler for assistance with the affinity experiment. Funding. The funding for the research included in the manuscript was fully provided by Max Planck Institute of Molecular Plant Physiology.