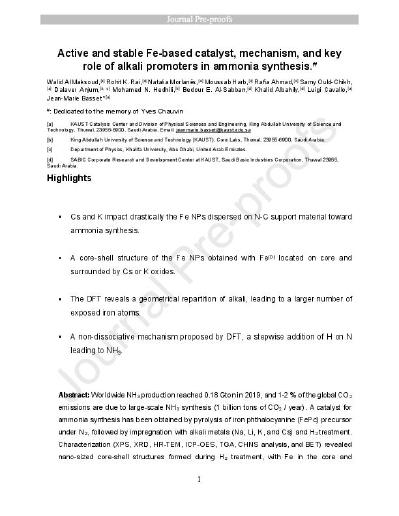 Worldwide NH3 production reached 0.18 Gton in 2019, and 1-2 % of the global CO2 emissions are due to large-scale NH3 synthesis (1 billion tons of CO2 / year). A catalyst for ammonia synthesis has been obtained by pyrolysis of iron phthalocyanine (FePc) precursor under N2, followed by impregnation with alkali metals (Na, Li, K, and Cs) and H2 treatment. Characterization (XPS, XRD, HR-TEM, ICP-OES, TGA, CHNS analysis, and BET) revealed nano-sized core-shell structures formed during H2 treatment, with Fe in the core and promoters (“Cs2O” and “K2O”) with carbon on the shell. The alkali metals partially inhibit the methanation process of carbon. These Fe NPs were found to be very active and stable catalysts, as compared to the commercial iron-based catalyst KM1 (Haldor-Topsoe). Activities of promoted catalysts follow the order: K>Cs>Na∼Li, with more than 6% of NH3 at 400 °C and 7 MPa, and contact time (WHSV) of 12000 ml.g-1.h-1 with K. The apparent activation energy was found to be 31 kJ.mol-1 and 34 kJ.mol-1 for 3-K-FePc700 and 10-Cs-FePc700 suggesting the facile activation of N2 on the catalysts surface. DFT-based predicted atomic and electronic structures reveal a similarity in the partial charge distribution on surface Fe species with K or Cs. Surprisingly the main effect of alkali is related to the geometrical repartition of alkali, leading to a larger number of exposed iron atoms, active sites, in the case of K than Cs. The alkali (present as metal oxide) leaves at medium coverage of the surface some exposed Fe(0) for N2 non-dissociative chemisorption (end-on type). The free energy profile demonstrates that the thermodynamic stability of the reaction intermediates for nitrogen reduction reaction (NRR) increases with pressure indicating better feasibility of the reaction at higher pressures.