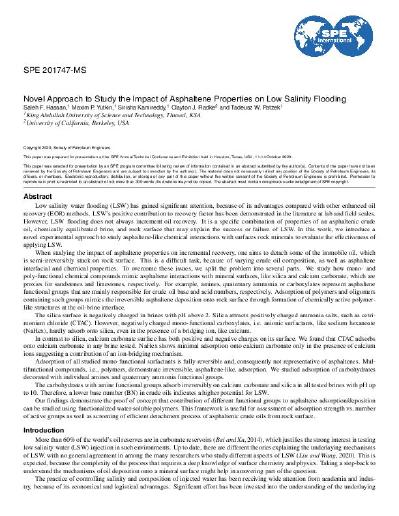 Low salinity water flooding (LSW) has gained significant attention, because of its advantages compared with other enhanced oil recovery (EOR) methods. LSW's positive contribution to recovery factor has been demonstrated in the literature at lab and field scales. However, LSW flooding does not always increment oil recovery. It is a specific combination of properties of an asphaltenic crude oil, chemically equilibrated brine, and rock surface that may explain the success or failure of LSW. In this work, we introduce a novel experimental approach to study asphaltene-like chemical interactions with surfaces rock minerals to evaluate the effectiveness of applying LSW. When studying the impact of asphaltene properties on incremental recovery, one aims to detach some of the immobile oil, which is semi-irreversibly stuck on rock surface. This is a difficult task, because of varying crude oil composition, as well as asphaltene interfacial and chemical properties. To overcome these issues, we split the problem into several parts. We study how mono- and poly-functional chemical compounds mimic asphaltene interactions with mineral surfaces, like silica and calcium carbonate, which are proxies for sandstones and limestones, respectively. For example, amines, quaternary ammonia or carboxylates represent asphaltene functional groups that are mainly responsible for crude oil base and acid numbers, respectively. Adsorption of polymers and oligomers containing such groups mimics the irreversible asphaltene deposition onto rock surface through formation of chemically active polymerlike structures at the oil-brine interface. The silica surface is negatively charged in brines with pH above 2. Silica attracts positively charged ammonia salts, such as cetrimonium chloride (CTAC). However, negatively charged mono-functional carboxylates, i.e. anionic surfactants, like sodium hexanoate (NaHex), hardly adsorb onto silica, even in the presence of a bridging ion, like calcium. In contrast to silica, calcium carbonate surface has both positive and negative charges on its surface. We found that CTAC adsorbs onto calcium carbonate in any brine tested. NaHex shows minimal adsorption onto calcium carbonate only in the presence of calcium ions suggesting a contribution of an ion-bridging mechanism. Adsorption of all studied mono-functional surfactants is fully reversible and, consequently not representative of asphaltenes. Multifunctional compounds, i.e., polymers, demonstrate irreversible, asphaltene-like, adsorption. We studied adsorption of carbohydrates decorated with individual amines and quaternary ammonia functional groups. The carbohydrates with amine functional groups adsorb irreversibly on calcium carbonate and silica in all tested brines with pH up to 10. Therefore, a lower base number (BN) in crude oils indicates a higher potential for LSW. Our findings demonstrate the proof of concept that contribution of different functional groups to asphaltene adsorption/deposition can be studied using functionalized water-soluble polymers. This framework is useful for assessment of adsorption strength vs. number of active groups as well as screening of efficient detachment process of asphaltenic crude oils from rock surface

This work was fully funded by Prof. Patzek's baseline research grant (SK, MPY). SFH would like to thank Saudi Aramco/EXPEC Advanced Research Center for sponsoring his PhD studies at the King Abdullah University of Science and Technology (KAUST).