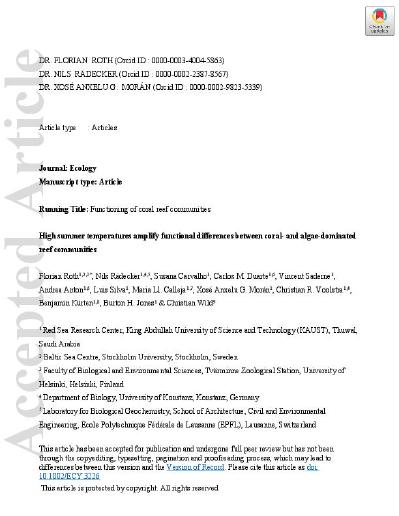 We are grateful to the personnel from the King Abdullah University of Science and Technology (KAUST) Coastal and Marine Resources Core (CMOR) Laboratory for logistical support. The authors would also like to acknowledge Rodrigo Villalobos and João Cúrdia who helped during fieldwork. Figure 5 was produced by Xavier Pita, scientific illustrator at KAUST. We would liketo thank the two anonymous reviewers and the editor for their helpful suggestions and comments. The research was supported by KAUST baseline funding to BHJ and by grant Wi 2677/9-1 from the German Research Foundation (DFG) to CW. Author contributions:FR, CW and SC conceptualized and designed research. FR, LS, MLC, and VS performed research. FR, NR, VS, AA, LS, BK, and MLC analyzed data. CMD, XAGM, CRV, and BHJ contributed to research materials, logistics and to interpreting data. FR wrote original draft of the manuscript with support by CW. All authors read and approved the final manuscript