Evolution and biogeography of the Zanclea-Scleractinia symbiosis 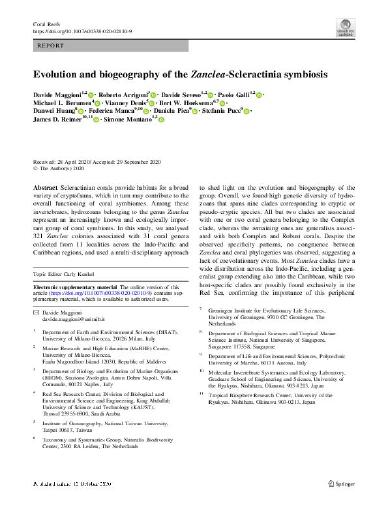 Abstract Scleractinian corals provide habitats for a broad variety of cryptofauna, which in turn may contribute to the overall functioning of coral symbiomes. Among these invertebrates, hydrozoans belonging to the genus Zanclea represent an increasingly known and ecologically important group of coral symbionts. In this study, we analysed 321 Zanclea colonies associated with 31 coral genera collected from 11 localities across the Indo-Pacific and Caribbean regions, and used a multi-disciplinary approach to shed light on the evolution and biogeography of the group. Overall, we found high genetic diversity of hydrozoans that spans nine clades corresponding to cryptic or pseudo-cryptic species. All but two clades are associated with one or two coral genera belonging to the Complex clade, whereas the remaining ones are generalists associated with both Complex and Robust corals. Despite the observed specificity patterns, no congruence between Zanclea and coral phylogenies was observed, suggesting a lack of coevolutionary events. Most Zanclea clades have a wide distribution across the Indo-Pacific, including a generalist group extending also into the Caribbean, while two host-specific clades are possibly found exclusively in the Red Sea, confirming the importance of this peripheral region as an endemicity hotspot. Ancestral state reconstruction suggests that the most recent common ancestor of all extant coral-associated Zanclea was a specialist species with a perisarc, occurring in what is now known as the Indo-Pacific. Ultimately, a mixture of geography- and host-related diversification processes is likely responsible for the observed enigmatic phylogenetic structure of coral-associated Zanclea.

Except where otherwise noted, this item's license is described as This article is licensed under a Creative Commons Attribution 4.0 International License, which permits use, sharing, adaptation, distribution and reproduction in any medium or format, as long as you give appropriate credit to the original author(s) and the source, provide a link to the Creative Commons licence, and indicate if changes were made. The images or other third party material in this article are included in the article’s Creative Commons licence, unless indicated otherwise in a credit line to the material. If material is not included in the article’s Creative Commons licence and your intended use is not permitted by statutory regulation or exceeds the permitted use, you will need to obtain permission directly from the copyright holder.