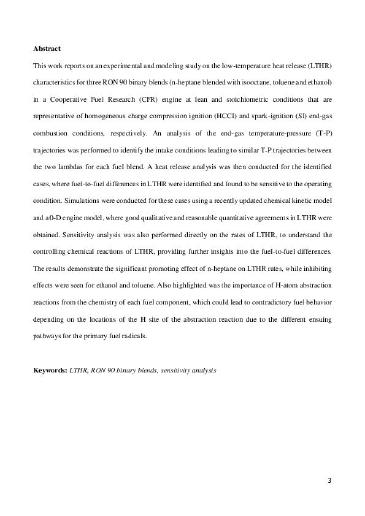 This work reports on an experimental and modeling study on the low-temperature heat release (LTHR) characteristics for three RON 90 binary blends (n-heptane blended with isooctane, toluene and ethanol) in a Cooperative Fuel Research (CFR) engine at lean and stoichiometric conditions that are representative of homogeneous charge compression ignition (HCCI) and spark-ignition (SI) end-gas combustion conditions, respectively. An analysis of the end-gas temperature-pressure (T-P) trajectories was performed to identify the intake conditions leading to similar T-P trajectories between the two lambdas for each fuel blend. A heat release analysis was then conducted for the identified cases, where fuel-to-fuel differences in LTHR were identified and found to be sensitive to the operating condition. Simulations were conducted for these cases using a recently updated chemical kinetic model and a 0-D engine model, where good qualitative and reasonable quantitative agreements in LTHR were obtained. Sensitivity analysis was also performed directly on the rates of LTHR, to understand the controlling chemical reactions of LTHR, providing further insights into the fuel-to-fuel differences. The results demonstrate the significant promoting effect of n-heptane on LTHR rates, while inhibiting effects were seen for ethanol and toluene. Also highlighted was the importance of H-atom abstraction reactions from the chemistry of each fuel component, which could lead to contradictory fuel behavior depending on the locations of the H site of the abstraction reaction due to the different ensuing pathways for the primary fuel radicals.

The submitted manuscript has been created in part by UChicago Argonne, LLC, Operator of Argonne National Laboratory (“Argonne”). Argonne, a U.S. Department of Energy Office of Science laboratory, is operated under Contract No. DE-AC02-06CH11357. The U.S. Government retains for itself, and others acting on its behalf, a paid-up nonexclusive, irrevocable worldwide license in said article to reproduce, prepare derivative works, distribute copies to the public, and perform publicly and display publicly, by or on behalf of the Government. The Department of Energy will provide public access to these results of federally sponsored research in accordance with the DOE Public Access Plan. http://energy.gov/downloads/doe-public-access-plan. This work is performed under the auspices of the Office of Energy Efficiency and Renewable Energy, Office of Vehicle Technology, U.S. Department of Energy, under contract number DE-AC02-06CH11357, as part of the Co-Optimization of Fuels & Engines (Co-Optima).

Proceedings of the Combustion Institute