When forms meet genes: Revision of the scleractinian genera Micromussa and Homophyllia (Lobophylliidae) with a description of two new species and one new genus 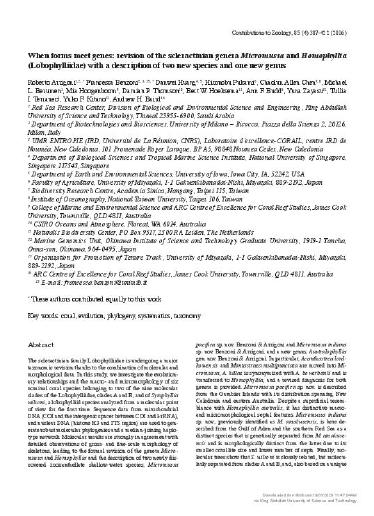 The scleractinian family Lobophylliidae is undergoing a major taxonomic revision thanks to the combination of molecular and morphological data. In this study, we investigate the evolutionary relationships and the macro- and micromorphology of six nominal coral species belonging to two of the nine molecular clades of the Lobophylliidae, clades A and B, and of Symphyllia wilsoni, a lobophylliid species analyzed from a molecular point of view for the first time. Sequence data from mitochondrial DNA (COI and the intergenic spacer between COI and l-rRNA), and nuclear DNA (histone H3 and ITS region) are used to generate robust molecular phylogenies and a median-joining haplotype network. Molecular results are strongly in agreement with detailed observations of gross- and fine-scale morphology of skeletons, leading to the formal revision of the genera Micromussa and Homophyllia and the description of two newly discovered zooxanthellate shallow-water species, Micromussa pacifica sp. nov. Benzoni & Arrigoni and Micromussa indiana sp. nov. Benzoni & Arrigoni, and a new genus, Australophyllia gen. nov. Benzoni & Arrigoni. In particular, Acanthastrea lordhowensis and Montastraea multipunctata are moved into Micromussa, A. hillae is synonymized with A. bowerbanki and is transferred to Homophyllia, and a revised diagnosis for both genera is provided. Micromussa pacifica sp. nov. is described from the Gambier Islands with its distribution spanning New Caledonia and eastern Australia. Despite a superficial resemblance with Homophyllia australis, it has distinctive macroand micromorphological septal features. Micromussa indiana sp. nov., previously identified as M. amakusensis, is here described from the Gulf of Aden and the southern Red Sea as a distinct species that is genetically separated from M. amakusensis and is morphologically distinct from the latter due to its smaller corallite size and lower number of septa. Finally, molecular trees show that S. wilsoni is closely related, but molecularly separated from clades A and B, and, also based on a unique combination of corallite and sub-corallite characters, the species is moved into Australophyllia gen. nov. These findings confirm the need for using both genetic and morphological datasets for the ongoing taxonomic revision of scleractinian corals.

New Caledonia data and specimens were obtained during the CORALCAL4 (http://dx.doi.org/10.17600/12100060), BIBELOT (http://dx.doi.org/10.17600/14003700), CORALCAL5 (http://dx.doi.org/10.17600/15004300), and CHEST (http://dx. doi.org/10.17600/15004500) expeditions on the RV Alis. We are grateful to the Captain and the crew for their valuable help during the campaigns and their knowledge of the Neocaledonian reefs during fieldwork. The participation of F.B. and B.W.H. was possible thanks to the kind help and support of C. Payri and B. Dreyfus. We are also grateful to J.L. Menou, J. Butscher, G. Lasne, E. Folcher, and A. Arnaud. We are grateful to E. Karsenti (EMBL), É. Bourgois (Tara Expeditions), and the OCEANS Consortium for sampling in Gambier Island during the Tara Oceans expedition. We thank the commitment of the following people and sponsors who made this singular expedition possible: CNRS, EMBL, Genoscope/CEA, VIB, Stazione Zoologica Anton Dohrn, UNIMIB, ANR (projects POSEIDON/ANR-09-BLAN-0348, BIOMARKS/ANR-08-BDVA-003, PROMETHEUS/ANR-09-GENM-031, and TARA-GIRUS/ ANR09-PCS-GENM-218), EU FP7 (MicroB3/No.287589), FWO, BIO5, Biosphere 2, agnès b., the Veolia Environment Foundation, Region Bretagne, World Courier, Illumina, Cap L’Orient, the EDF Foundation EDF Diversiterre, FRB, the Prince Albert II de Monaco Foundation, Etienne Bourgois, and the Tara schooner along with its captain and crew. Tara Oceans would not exist without continuous support from 23 institutes (http://oceans.taraexpeditions.org). This article is contribution number 44 of the Tara Oceans Expedition 2009-2012. We are grateful to E. Dutrieux (CREOCEAN), C.H. Chaineau (Total SA), R. Hirst, and M. AbdulAziz for allowing and supporting research in Yemen. We thank M. Pichon, S. Basheen, M.A. Ahmad, A. Suliman, F.N. Saeed, C. Riva, S. Montano, and A. Caragnano for their help in various aspects of field work in Yemen. T.H. Synclair-Taylor is acknowledged for (the best) in situ images of Homophyllia from Lord Howe Island, Australia. We are grateful to J. Moore for providing images of type material from the USNM. Coral collecting by B.W.H. was done during the Tun Mustapha Park Expedition 2012, which was jointly-organized by WWF Malaysia, Universiti Malaysia Sabah, Sabah Parks (Malaysia) and Naturalis Biodiversity Center, with special thanks to Z. Waheed who arranged the research permits. Coral collecting by A.H.B. was funded by the ARC Centre of Excellence for Coral Reef Studies. We are grateful to P. Gentile for technical help with SEM and P. Galli for laboratory support at UNIMIB. R.A. gratefully acknowledges the National Science Council of Taiwan for Summer Program in Taiwan 2013. This work is supported by King Abdullah University of Science and Technology’s Red Sea Research Center (CCF. grant FCC/1/1973-07 to M.L.B.).