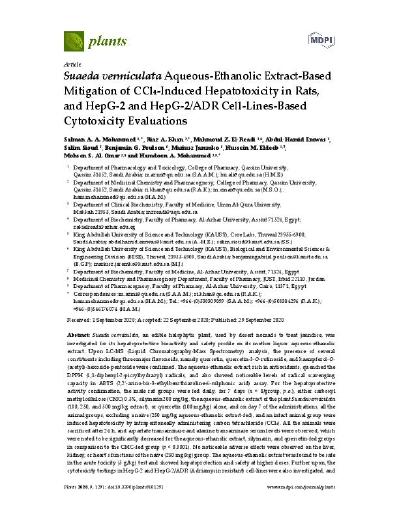 Suaeda vermiculata, an edible halophytic plant, used by desert nomads to treat jaundice, was investigated for its hepatoprotective bioactivity and safety profile on its mother liquor aqueous-ethanolic extract. Upon LC-MS (Liquid Chromatography-Mass Spectrometry) analysis, the presence of several constituents including three major flavonoids, namely quercetin, quercetin-3-O-rutinoside, and kaempferol-O-(acetyl)-hexoside-pentoside were confirmed. The aqueous-ethanolic extract, rich in antioxidants, quenched the DPPH (1,1-diphenyl-2-picrylhydrazyl) radicals, and also showed noticeable levels of radical scavenging capacity in ABTS (2,2'-azino-bis-3-ethylbenzthiazoline-6-sulphonic acid) assay. For the hepatoprotective activity confirmation, the male rat groups were fed daily, for 7 days (n = 8/group, p.o.), either carboxyl methylcellulose (CMC) 0.5%, silymarin 200 mg/kg, the aqueous-ethanolic extract of the plant Suaeda vermiculata (100, 250, and 500 mg/kg extract), or quercetin (100 mg/kg) alone, and on day 7 of the administrations, all the animal groups, excluding a naïve (250 mg/kg aqueous-ethanolic extract-fed), and an intact animal group were induced hepatotoxicity by intraperitoneally administering carbon tetrachloride (CCl4). All the animals were sacrificed after 24 h, and aspartate transaminase and alanine transaminase serum levels were observed, which were noted to be significantly decreased for the aqueous-ethanolic extract, silymarin, and quercetin-fed groups in comparison to the CMC-fed group (p < 0.0001). No noticeable adverse effects were observed on the liver, kidney, or heart’s functions of the naïve (250 mg/kg) group. The aqueous-ethanolic extract was found to be safe in the acute toxicity (5 g/kg) test and showed hepatoprotection and safety at higher doses. Further upon, the cytotoxicity testings in HepG-2 and HepG-2/ADR (Adriamycin resistant) cell-lines were also investigated, and the IC50 values were recorded at 56.19±2.55 µg/mL, and 78.40±0.32 µg/mL (p < 0.001, Relative Resistance RR 1.39), respectively, while the doxorubicin (Adriamycin) IC50 values were found to be 1.3±0.064, and 4.77±1.05 µg/mL (p < 0.001, RR 3.67), respectively. The HepG-2/ADR cell-lines when tested in a combination of the aqueous-ethanolic extract with doxorubicin, a significant reversal in the doxorubicin’s IC50 value by 2.77 folds (p < 0.001, CI = 0.56) was noted as compared to the cytotoxicity test where the extract was absent. The mode of action for the reversal was determined to be synergistic in nature indicating the role of the aqueous-ethanolic extract.

Except where otherwise noted, this item's license is described as This is an open access article distributed under the Creative Commons Attribution License which permits unrestricted use, distribution, and reproduction in any medium, provided the original work is properly cited.