Polyphyly of the genus Zanclea and family Zancleidae (Hydrozoa, Capitata) revealed by the integrative analysis of two bryozoan-associated species 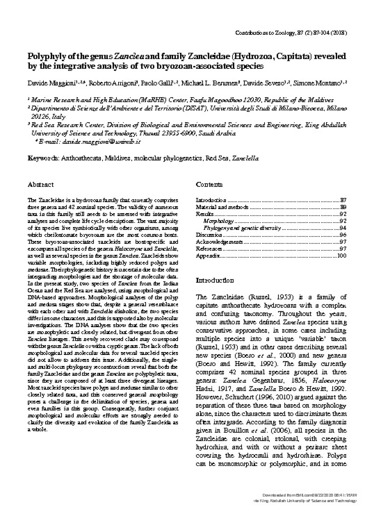 The Zancleidae is a hydrozoan family that currently comprises three genera and 42 nominal species. The validity of numerous taxa in this family still needs to be assessed with integrative analyses and complete life cycle descriptions. The vast majority of its species live symbiotically with other organisms, among which cheilostomate bryozoans are the most common hosts. These bryozoan-associated zancleids are host-specific and encompass all species of the genera Halocoryne and Zanclella, as well as several species in the genus Zanclea. Zancleids show variable morphologies, including highly reduced polyps and medusae. Their phylogenetic history is uncertain due to the often intergrading morphologies and the shortage of molecular data. In the present study, two species of Zanclea from the Indian Ocean and the Red Sea are analysed, using morphological and DNA-based approaches. Morphological analyses of the polyp and medusa stages show that, despite a general resemblance with each other and with Zanclella diabolica, the two species differ in some characters, and this is supported also by molecular investigations. The DNA analyses show that the two species are monophyletic and closely related, but divergent from other Zanclea lineages. This newly recovered clade may correspond with the genus Zanclella or with a cryptic genus. The lack of both morphological and molecular data for several zancleid species did not allow to address this issue. Additionally, the singleand multi-locus phylogeny reconstructions reveal that both the family Zancleidae and the genus Zanclea are polyphyletic taxa, since they are composed of at least three divergent lineages. Most zancleid species have polyps and medusae similar to other closely related taxa, and this conserved general morphology poses a challenge in the delimitation of species, genera and even families in this group. Consequently, further conjunct morphological and molecular efforts are strongly needed to clarify the diversity and evolution of the family Zancleida as a whole.

The authors wish to thank Tullia Terraneo, Malek Amr Gusti, Luca Fallati, Luca Saponari, Inga Dehnert, Enrico Montalbetti, and Bert W. Hoeksema for support during field activities. We thank Prof. Timothy Ravasi as co-organizer of the Farasan Banks Expedition in May 2017. Authors are very grateful to Horia R. Galea, Stefano Piraino, Peter Schuchert, and an anonymous reviewer for their comments and suggestions, which greatly improved this manuscript. This research was undertaken in accordance with the policies and procedures of the King Abdullah University of Science and Technology (KAUST) and the government agencies of the Republic of Maldives. Permissions relevant for KAUST and MaRHE Center to undertake the research have been obtained from the applicable governmental agencies in the Kingdom of Saudi Arabia and the Republic of Maldives, respectively. This project was supported by funding from Università degli Studi di Milano-Bicocca (baseline research funds to PG) and from KAUST (FCC/1/1973 and baseline research funds to MLB).