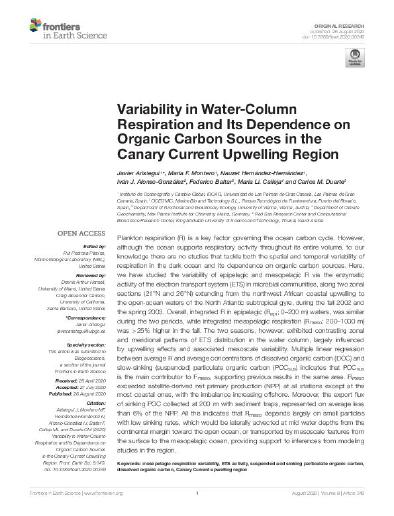 Plankton respiration (R) is a key factor governing the ocean carbon cycle. However, although the ocean supports respiratory activity throughout its entire volume, to our knowledge there are no studies that tackle both the spatial and temporal variability of respiration in the dark ocean and its dependence on organic carbon sources. Here, we have studied the variability of epipelagic and mesopelagic R via the enzymatic activity of the electron transport system (ETS) in microbial communities, along two zonal sections (21°N and 26°N) extending from the northwest African coastal upwelling to the open-ocean waters of the North Atlantic subtropical gyre, during the fall 2002 and the spring 2003. Overall, integrated R in epipelagic (Repi; 0–200 m) waters, was similar during the two periods, while integrated mesopelagic respiration (Rmeso; 200–1000 m) was >25% higher in the fall. The two seasons, however, exhibited contrasting zonal and meridional patterns of ETS distribution in the water column, largely influenced by upwelling effects and associated mesoscale variability. Multiple linear regression between average R and average concentrations of dissolved organic carbon (DOC) and slow-sinking (suspended) particulate organic carbon (POCsus) indicates that POCsus is the main contributor to Rmeso, supporting previous results in the same area. Rmeso exceeded satellite-derived net primary production (NPP) at all stations except at the most coastal ones, with the imbalance increasing offshore. Moreover, the export flux of sinking POC collected at 200 m with sediment traps, represented on average less than 6% of the NPP. All this indicates that Rmeso depends largely on small particles with low sinking rates, which would be laterally advected at mid water depths from the continental margin toward the open ocean, or transported by mesoscale features from the surface to the mesopelagic ocean, providing support to inferences from modeling studies in the region.