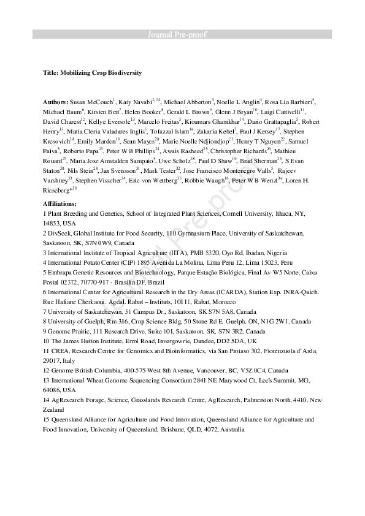 Over the past 70 years, the world has witnessed extraordinary growth in crop productivity, enabled by a suite of technological advances, including higher yielding crop varieties, improved farm management, synthetic agrochemicals, and agricultural mechanization. While this “Green Revolution” intensified crop production, and is credited with reducing famine and malnutrition, its benefits were accompanied by several undesirable collateral effects (Pingali, 2012). These include a narrowing of agricultural biodiversity, stemming from increased monoculture and greater reliance on a smaller number of crops and crop varieties for the majority of our calories. This reduction in diversity has created vulnerabilities to pest and disease epidemics, climate variation, and ultimately to human health (Harlan, 1972). The value of crop diversity has long been recognized (Vavilov, 1992). A global system of genebanks (e.g. www.genebanks.org/genebanks/) was established in the 1970s to preserve the abundant genetic variation found in traditional “landrace” varieties of crops and in crop wild relatives (Harlan, 1972). While preserving crop variation is a critical first step, the time has come to make use of this variation to breed more resilient crops. The DivSeek International Network (https://divseekintl.org/) is a scientific, not-for- profit organization that aims to accelerate such efforts. Crop diversity: value, barriers to use, and mitigation strategies There are >1750 national and international genebanks worldwide. They house ~7 million crop germplasm accessions ( http://www.fao.org/3/i1500e/i1500e00.htm), including samples of diverse natural populations, with many more managed in situ. These accessions arguably represent one of humanity’s greatest treasures, as they contain genetic variation that can be harnessed to create better tasting, higher yielding, disease/pest resistant, and climate resilient cultivars that require fewer agricultural inputs (Figure 1). Unfortunately, most genebank accessions are poorly characterized, and few have been utilized in breeding. Yet when a serious effort has been made to search genebanks for traits of interest, the effort has been highly rewarded. Examples include the discovery of a submergence-tolerant landrace used to breed new, high-yielding, submergence-tolerant rice varieties currently grown on tens of millions of acres (Mackill et al., 2012) and durable resistance to late blight, a devastating pathogen of potato, derived from a wild relative (Bernal-Galeano, 2020). Given the high value of the genetic diversity found in crop wild relatives and traditional landraces, why are these genetic resources not more widely employed in breeding programs? One reason for the limited use of genebank holdings is the paucity of information about them, which increases the time, expense, and risk associated with mining genebank diversity. To address this Journal Pre-proof