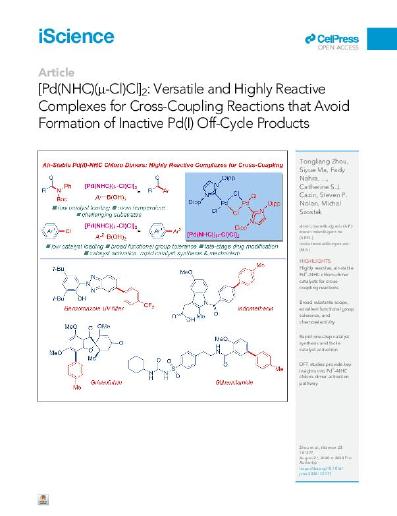 The development of more reactive, general, easily accessible, and readily available Pd(II)-NHC precatalysts remains a key challenge in homogeneous catalysis. In this study, we establish air-stable NHC-Pd(II) chloro-dimers, [Pd(NHC)(μ-Cl)Cl]2, as the most reactive Pd(II)-NHC catalysts developed to date. Most crucially, compared with [Pd(NHC)(allyl)Cl] complexes, replacement of the allyl throw-away ligand with chloride allows for a more facile activation step, while effectively preventing the formation of off-cycle [Pd2(μ-allyl)(μ-Cl)(NHC)2] products. The utility is demonstrated via broad compatibility with amide cross-coupling, Suzuki cross-coupling, and the direct, late-stage functionalization of pharmaceuticals. Computational studies provide key insight into the NHC-Pd(II) chloro-dimer activation pathway. A facile synthesis of NHC-Pd(II) chloro-dimers in one-pot from NHC salts is reported. Considering the tremendous utility of Pd-catalyzed cross-coupling reactions and the overwhelming success of [Pd(NHC)(allyl)Cl] precatalysts, we believe that NHC-Pd(II) chloro-dimers, [Pd(NHC)(μ-Cl)Cl]2, should be considered as go-to precatalysts of choice in cross-coupling processes.

We thank Rutgers University (M.S.), the NSF (CAREER CHE-1650766, M.S.), and the NIH (1R35GM133326, M.S.) for financial support. The Bruker 500 MHz spectrometer used in this study was supported by the NSF-MRI grant (CHE-1229030). For work conducted in Belgium, S.P.N. and C.S.J.C. wish to thank the UGent BOF (starter and senior research grants). Umicore AG is thanked for gifts of materials. A.P. is a Serra Húnter Fellow and ICREA Academia Prize 2019 holder. A.P. thanks the Spanish MICINN for project PGC2018-097722-B-I00. T.Z. S.M. F.N. A.M.C.O. A.P. L.C. and C.S.J.C. performed the experiments. M.S. A.P. and S.P.N. wrote the manuscript and directed the project. All the authors discussed the results and commented on the manuscript. The authors declare no competing interests.

Except where otherwise noted, this item's license is described as This is an open access article under the CC BY license.