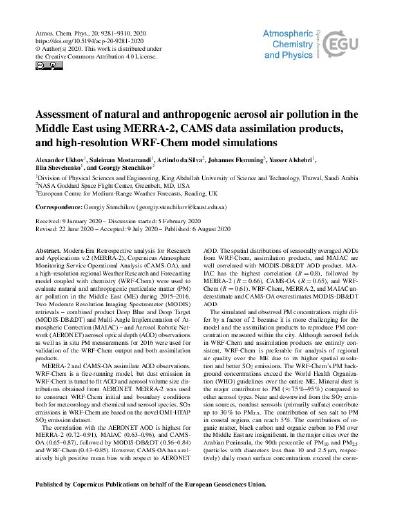 Modern-Era Retrospective analysis for Research and Applications v.2 (MERRA-2), Copernicus Atmosphere Monitoring Service Operational Analysis (CAMS-OA), and a high-resolution regional Weather Research and Forecasting model coupled with chemistry (WRF-Chem) were used to evaluate natural and anthropogenic particulate matter (PM) air pollution in the Middle East (ME) during 2015–2016. Two Moderate Resolution Imaging Spectrometer (MODIS) retrievals – combined product Deep Blue and Deep Target (MODIS-DB&DT) and Multi-Angle Implementation of Atmospheric Correction (MAIAC) – and Aerosol Robotic Network (AERONET) aerosol optical depth (AOD) observations as well as in situ PM measurements for 2016 were used for validation of the WRF-Chem output and both assimilation products. MERRA-2 and CAMS-OA assimilate AOD observations. WRF-Chem is a free-running model, but dust emission in WRF-Chem is tuned to fit AOD and aerosol volume size distributions obtained from AERONET. MERRA-2 was used to construct WRF-Chem initial and boundary conditions both for meteorology and chemical and aerosol species. SO2 emissions in WRF-Chem are based on the novel OMI-HTAP SO2 emission dataset. The correlation with the AERONET AOD is highest for MERRA-2 (0.72–0.91), MAIAC (0.63–0.96), and CAMS-OA (0.65–0.87), followed by MODIS-DB&DT (0.56–0.84) and WRF-Chem (0.43–0.85). However, CAMS-OA has a relatively high positive mean bias with respect to AERONET AOD. The spatial distributions of seasonally averaged AODs from WRF-Chem, assimilation products, and MAIAC are well correlated with MODIS-DB&DT AOD product. MAIAC has the highest correlation (R=0.8), followed by MERRA-2 (R=0.66), CAMS-OA (R=0.65), and WRF-Chem (R=0.61). WRF-Chem, MERRA-2, and MAIAC underestimate and CAMS-OA overestimates MODIS-DB&DT AOD. The simulated and observed PM concentrations might differ by a factor of 2 because it is more challenging for the model and the assimilation products to reproduce PM concentration measured within the city. Although aerosol fields in WRF-Chem and assimilation products are entirely consistent, WRF-Chem is preferable for analysis of regional air quality over the ME due to its higher spatial resolution and better SO2 emissions. The WRF-Chem’s PM background concentrations exceed the World Health Organization (WHO) guidelines over the entire ME. Mineral dust is the major contributor to PM (≈75 %–95 %) compared to other aerosol types. Near and downwind from the SO2 emission sources, nondust aerosols (primarily sulfate) contribute up to 30 % to PM2.5. The contribution of sea salt to PM in coastal regions can reach 5 %. The contributions of organic matter, black carbon and organic carbon to PM over the Middle East are insignificant. In the major cities over the Arabian Peninsula, the 90th percentile of PM10 and PM2.5 (particles with diameters less than 10 and 2.5 µm, respectively) daily mean surface concentrations exceed the corresponding Kingdom of Saudi Arabia air quality limits. The contribution of the nondust component to PM2.5 is <25 %, which limits the emission control effect on air quality. The mitigation of the dust effect on air quality requires the development of environment-based approaches like growing tree belts around the cities and enhancing in-city vegetation cover. The WRF-Chem configuration presented in this study could be a prototype of a future air quality forecast system that warns the population against air pollution hazards.

This research has been supported by the KAUST Competitive Research Grant (URF/1/2180-01-01) “Combined Radiative and Air Quality Effects of Anthropogenic Air Pollution and Dust over the Arabian Peninsula”.