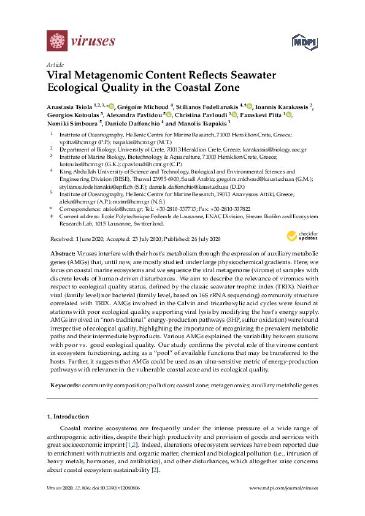 Viruses interfere with their host's metabolism through the expression of auxiliary metabolic genes (AMGs) that, until now, are mostly studied under large physicochemical gradients. Here, we focus on coastal marine ecosystems and we sequence the viral metagenome (virome) of samples with discrete levels of human-driven disturbances. We aim to describe the relevance of viromics with respect to ecological quality status, defined by the classic seawater trophic index (TRIX). Neither viral (family level) nor bacterial (family level, based on 16S rRNA sequencing) community structure correlated with TRIX. AMGs involved in the Calvin and tricarboxylic acid cycles were found at stations with poor ecological quality, supporting viral lysis by modifying the host's energy supply. AMGs involved in "non-traditional" energy-production pathways (3HP, sulfur oxidation) were found irrespective of ecological quality, highlighting the importance of recognizing the prevalent metabolic paths and their intermediate byproducts. Various AMGs explained the variability between stations with poor vs. good ecological quality. Our study confirms the pivotal role of the virome content in ecosystem functioning, acting as a "pool" of available functions that may be transferred to the hosts. Further, it suggests that AMGs could be used as an ultra-sensitive metric of energy-production pathways with relevance in the vulnerable coastal zone and its ecological quality.

The authors would like to thank the Captain and the crew of R/V Philia as well as Ioanna Kalantzi (ORCID 0000-0002-6539-4739), Eleni Rouselaki, and Irini Tsikopoulou (ORCID 0000-0002-8525-3466) for their help at sea. Eleftheria Papadopoulou (ORCID 0000-0002-4438-4531) and Jon Bent Kristoffersen are thanked for their help during laboratory analyses. Matthew Sullivan (ORCID 0000-0001-8398-8234) and Bonnie Poulos from the Texas University, Pascal Hingamp (ORCID 0000-0002-7463-2444) from the Aix-Marseille Université, and Nigel Grimsley (ORCID 0000-0001-9323-417X) and Hugo Lebredonchel from the Laboratoire Oceanographie de Banuyls sur Mer are especially thanked for their immediate responses during and after sampling expeditions regarding viral DNA collection and sequencing issues. We thank Anna Tsiola for providing professional English editing of the text. Finally, we especially thank the two anonymous reviewers who greatly improved the quality of this manuscript.
This work was supported by the European Water Framework Directive (2000/60/EC), the EU FP7 project “MicroB3 (Marine Microbial Biodiversity, Bioinformatics, Biotechnology, grant agreement ID: 287589)”, the project RECONNECT (MIS 5017160) financed by the Transnational Cooperation Programme Interreg V-B “Balkan-Mediterranean 2014-2020” and co-funded by the European Union and national funds of the participating countries and by baseline funding to D.D. (KAUST).