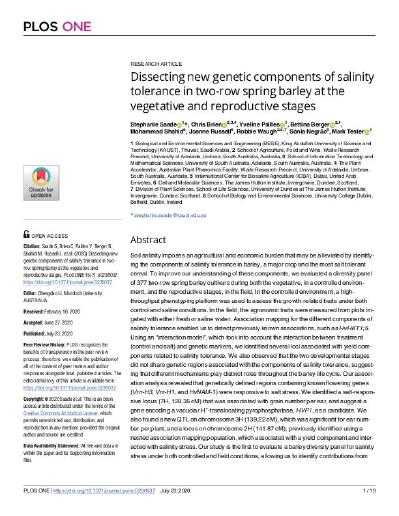 Soil salinity imposes an agricultural and economic burden that may be alleviated by identifying the components of salinity tolerance in barley, a major crop and the most salt tolerant cereal. To improve our understanding of these components, we evaluated a diversity panel of 377 two-row spring barley cultivars during both the vegetative, in a controlled environment, and the reproductive stages, in the field. In the controlled environment, a high-throughput phenotyping platform was used to assess the growth-related traits under both control and saline conditions. In the field, the agronomic traits were measured from plots irrigated with either fresh or saline water. Association mapping for the different components of salinity tolerance enabled us to detect previously known associations, such as HvHKT1;5. Using an "interaction model", which took into account the interaction between treatment (control and salt) and genetic markers, we identified several loci associated with yield components related to salinity tolerance. We also observed that the two developmental stages did not share genetic regions associated with the components of salinity tolerance, suggesting that different mechanisms play distinct roles throughout the barley life cycle. Our association analysis revealed that genetically defined regions containing known flowering genes (Vrn-H3, Vrn-H1, and HvNAM-1) were responsive to salt stress. We identified a salt-responsive locus (7H, 128.35 cM) that was associated with grain number per ear, and suggest a gene encoding a vacuolar H+-translocating pyrophosphatase, HVP1, as a candidate. We also found a new QTL on chromosome 3H (139.22 cM), which was significant for ear number per plant, and a locus on chromosome 2H (141.87 cM), previously identified using a nested association mapping population, which associated with a yield component and interacted with salinity stress. Our study is the first to evaluate a barley diversity panel for salinity stress under both controlled and field conditions, allowing us to identify contributions from new components of salinity tolerance which could be used for marker-assisted selection when breeding for marginal and saline regions.

The research reported in this publication was supported by funding from KAUST to the Baseline of Mark Tester.