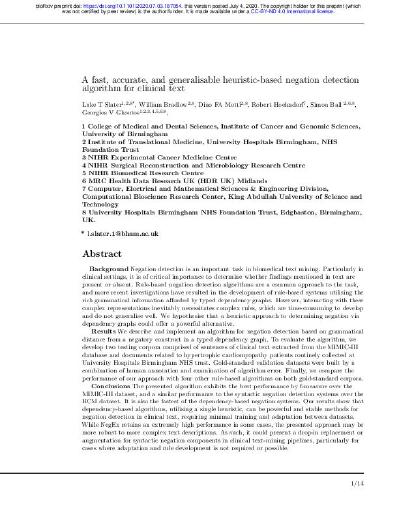 AbstractBackgroundNegation detection is an important task in biomedical text mining. Particularly in clinical settings, it is of critical importance to determine whether findings mentioned in text are present or absent. Rule-based negation detection algorithms are a common approach to the task, and more recent investigations have resulted in the development of rule-based systems utilising the rich grammatical information afforded by typed dependency graphs. However, interacting with these complex representations inevitably necessitates complex rules, which are time-consuming to develop and do not generalise well. We hypothesise that a heuristic approach to determining negation via dependency graphs could offer a powerful alternative.ResultsWe describe and implement an algorithm for negation detection based on grammatical distance from a negatory construct in a typed dependency graph. To evaluate the algorithm, we develop two testing corpora comprised of sentences of clinical text extracted from the MIMIC-III database and documents related to hypertrophic cardiomyopathy patients routinely collected at University Hospitals Birmingham NHS trust. Gold-standard validation datasets were built by a combination of human annotation and examination of algorithm error. Finally, we compare the performance of our approach with four other rule-based algorithms on both gold-standard corpora.ConclusionsThe presented algorithm exhibits the best performance by f-measure over the MIMIC-III dataset, and a similar performance to the syntactic negation detection systems over the HCM dataset. It is also the fastest of the dependency-based negation systems. Our results show that dependency-based algorithms, utilising a single heuristic, can be powerful and stable methods for negation detection in clinical text, requiring minimal training and adaptation between datasets. While NegEx retains an extremely high performance in some cases, the presented approach may be more robust to more complex text descriptions. As such, it could present a drop-in replacement or augmentation for syntactic negation components in clinical text-mining pipelines, particularly for cases where adaptation and rule development is not required or possible.

GVG and LTS acknowledge support from support from the NIHR Birmingham ECMC, NIHR Birmingham SRMRC, Nanocommons H2020-EU (731032) and the NIHR Birmingham Biomedical Research Centre and the MRC HDR UK (HDRUK/CFC/01), an initiative funded by UK Research and Innovation, Department of Health and Social Care (England) and the devolved administrations, and leading medical research charities. The views expressed in this publication are those of the authors and not necessarily those of the NHS, the National Institute for Health Research, the Medical Research Council or the Department of Health. RH and GVG were supported by funding from King Abdullah University of Science and Technology (KAUST) Office of Sponsored Research (OSR) under Award No. URF/1/3790-01-01.